From Pixar’s perfect Up and Wall-E, to the atmospheric Coraline and classic Wizard of Oz 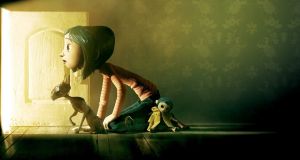 After moving to a remote Oregon community populated by elderly oddballs and one mysterious cat, a disgruntled only child stumbles into a dream world. A thrilling stop-motion adaptation of Neil Gaiman’s novel by Laika studios. You’ll never look at buttons in the same way. (Sky Box Office)

This winning animated adaptation of Ted Hughes’s book The Iron Man ditches the “Space-Bat-Angel-Dragon” of the source material in favour of Cold War tensions and a boy’s bond with a robot. Vin Diesel voices the titular contraption. (Google Play, iTunes)

The highest-ranking animated film on the most recent Sight & Sound critics’ poll of all-time greatest films unfolds as a series of fantastic adventures. Two young sisters move to the countryside where they encounter dust sprites, a cat bus, and the furry forest spirit of the title. (Netflix)

A noble prince slowly succumbing to demon poison and a human princess raised by wolves try to rescue the great forest spirit from the industrialising and ambitious Lady Eboshi. In common with many of the Studio Ghibli titles on Netflix, the English dub is vastly superior to the subtitled option. (Netflix)

Oscar-winning fantasy. Chihiro is travelling to her new home when a detour leaves her stranded in an otherworldly bathhouse. After her parents are transformed into pigs, she encounters many magical beings, including spirits, monsters, witches, and a boy who metamorphoses into a dragon. (Netflix)

A boy befriends a sentient balloon in the only short film – 35 minutes on the nose – to win the Academy Award for Best Original Screenplay and a Palme d’Or. Watch it here.  You can watch with the equally magical short Palle Alone in the World (Astrid Henning-Jensen, 1949) here. The perfect double bill for small people with big imaginations. (Public Domain)

If you want to turn a lockdown into a holiday, then you need Christmas and Easter staples Judy and Toto. From the songs to the winged monkeys, this lush technicolour masterpiece improves with age and repeat viewings. There’s no place like Oz. (Netflix)

Following one of the great movie overtures, an elderly widower (Ed Asner) ties thousands of balloons to his house and sets sail for South America, not knowing he has a boy scout stowaway. The mismatched duo soon encounter a reclusive explorer, a rare bird named Kevin, and many dogs. (Disney Plus)

A plucky trash-compacting robot, with only a cockroach and a VHS of Hello Dolly for companionship, continues to clean the abandoned, polluted Earth, long after humans have departed. His lonely routine is interrupted by the arrival of a sleek, clever lady robot. (Disney Plus)

The highest grossing anime film of all time concerns a high-school boy from Tokyo and a teenage girl from the mountains who periodically awaken in the other’s body. Traditional rituals and a comet add new intriguing dimensions to the body swap genre. (Google Play, iTunes)