The director is so hung up on avoiding the crime saga tropes, he loses the thrills 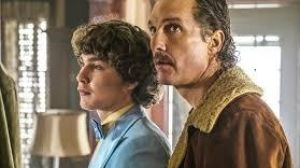 At the height of the 1980s drug epidemic, Nancy Reagan’s slogan “Just Say No” goes unheard in a decimated Detroit, home to Rick Wershe Jr (Richie Merritt), a naive hustler a who is recruited as an undercover agent for the FBI (Jennifer Jason Leigh and Rory Cochrane) when his gun-dealing dad, Rick Sr (Matthew McConaughey) refuses to co-operate.

Rick Jr – nicknamed “White Boy Rick” by his mostly black friends and cohorts – is plainly not a good kid, but, as sketched by Andy Weiss, Logan Miller and Noah Miller’s script, he’s not a villain either. Aided and abetted by the FBI, Rick is soon getting rich as a drug dealer. His actions may be reprehensible, but he is somewhat redeemed by his affection for his drug-addict sister Dawn (Bel Powley), his grandparents (Bruce Dern and Laurie Piper) and general stupidity.

The lopsided narrative struggles to accommodate a top-form McConaughey

The extraordinary true life of Rick Wershe, a teenage FBI informant turned teenage drug dealer, makes for a curiously downplayed film. Despite its gangland setting, and despite having the talented Yann Demange at the helm (who wrested genre thrills from the Northern Irish conflict in ’71), there’s not nearly enough sense of jeopardy in White Boy Rick.

A terrific cast occasionally shines through the low-key script. Why didn’t anyone think to include more scenes with Dern and Laurie? The lopsided narrative struggles to accommodate a top-form McConaughey.

Demange studiously avoids the well-worn beats of the crime saga. We don’t get moments that equate to the helicopter paranoia of Goodfellas or the cocaine meltdown of Scarface. And that, ultimately, is the film’s undoing. As churlish as it sounds, White Boy Rick is enjoyable enough but desperately in need of more clichés.

Rob Doyle: ‘Through writing, you can redeem even a disastrous life’
6

Where do love and hope ultimately come from?
7

The Turning: This film is a total waste of time. Don’t even read the review
9