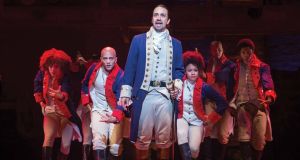 HAMILTON ★★★★☆
Directed by Thomas Kali. Starring Daveed Diggs, Renée Elise Goldsberry, Jonathan Groff, Christopher Jackson, Jasmine Cephas Jones, Lin-Manuel Miranda, Leslie Odom Jr. Disney+, 160 min
The smash musical comes to Disney+ in a version recorded over two roadway performances. The occasional sighting of conductor-orchestrator Alex Lacamoire in the pit and the ballet-rehearsal appropriateness of Paul Tazewell’s costumes work against any notion of sinking into the “movie”. It’s impossible to recreate the electricity of a live performance, but with a musical as beloved as Hamilton, one can hear the audience swoon as Jackson’s George Washington appears and Diggs’s Thomas Jefferson struts onto the stage. It works. TB

Societal expectations weigh heavily throughout the feature debut from Boulifa. Curtain twitching and over-the-fence gossip eventually snowball into a witch hunt to rival that of The Crucible. Long before the figurative pitchforks come out, there’s an ugly pettiness in the Essex class cul-de-sac where the two friends of the title live. This is a surefooted, gripping triumph from a two-time winner of the Illy Prize for Best Short Film at Cannes Directors’ Fortnight. TB

Lovely, wide-ranging documentary on antiquarian and independent New York booksellers. The film ambles along as a browser might in one the featured establishments. We move from a high-octane auction at Christie’s to the bustle of the famous Strand Bookstore near Union Square and on to younger enthusiasts for hip-hop publications. The stories are so interesting and the characters so engaging that the disorder never proves a problem. Excellent bookshop cats abound. DC

Appalling melodrama concerning a DA (Collins) who discovers a bearded prisoner (Pegg) in a pit at the bottom of the garden following the death of her father. Why does this thing exist? Almost everyone is miscast. The director’s last film (Terminal) was not a success. It’s not based on a bestselling airport novel. One helpful factor may have been fleeting similarities to the peerless TV series Succession, but don’t let that lead you astray. Rarely has hokum been cheaper or less diverting. DC