The race for the 2015 Palme d’Or looks at this stage to be between ‘Son of Saul’ and ‘Carol’, two extraordinary pictures from two very different film-makers 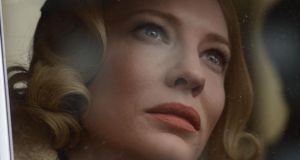 Cate Blanchett in Carol, Todd Hynes’s adaptation of a Patricia Highsmith novel about a lesbian romance

This correspondent has developed a theory that recent Cannes Film Festivals are a little like Star Trek films. Over the current decade, the even-numbered events have tended to be classics, whereas the odd-numbered festivals have lacked a little oomph. This lunatic notion tells us that the current event, the 68th, should offer cornucopias of delight.

Happily, we see no need to redraw the theorem just yet. True, on Friday night, we saw one of the worst films to play in competition this century. Gus Van Sant’s eye-wateringly atrocious The Sea of Trees, in which the former Palme d’Or winner presses Naomi Watts and Matthew McConaughey into a drama so soapy Nicholas Sparks might pause, wound down to the sort of booing that often precedes an art riot. A mix of New Age baloney and am-dram histrionics, the picture, set largely in a remote forest in Japan, will do nothing for any of the associated careers.

Much better was My Mother, by Nanni Moretti. Concerning a film director juggling pressures of work while her mother lies gravely ill, the picture is very moving and often funny, but it probably doesn’t have quite enough wallop to win Moretti a second Palme d’Or.

One of our major bookmakers had Yorgos Lanthimos’s blackly wonderful The Lobster down as antepost favourite for the big prize. Happily, the Irish co-production, starring Colin Farrell and Rachel Weisz, delivered on the promise of Dogtooth and Alps, the director’s earlier absurdist nightmares, and added greater levels of humour. Farrell ferments a terrific blend of Josef K and Father Dougal as one of several citizens who, if they fail to find a partner in a certain period, will be transformed into the animal of their choice. The film received deserved raves, but may be a little too outré to take the top prize.

At time of press, the race for the Palme, chosen by a jury headed by Joel and Ethan Coen, looks to be between two extraordinary pictures from very different film-makers. The last time a debut feature took the prize was a quarter of a century ago, when Steven Soderbergh’s Sex, Lies and Videotape triumphed. László Nemes’s Son of Saul could well be the film to break that run. The Hungarian picture stars Geza Rohrig as a Sonderkommando – one of those concentration-camp inmates who found themselves assisting with the exterminations – devastated by the realisation that he may have helped murder his own son. Those who cherish Theodor Adorno’s notion that there is “No poetry after Auschwitz” will have understandable worries about the picture. Nobody, however, can doubt the cinematic talent on display. The awful matter-of-fact nature of the killing is heightened by its frequent relegation to soft-focus background.

A protege of Béla Tarr, his famously austere compatriot, Nemes shoots in similarly long takes, but, unlike Tarr, he fills those shots with blazes of incident that must have caused logistical nightmares. There was a sense in Cannes that a new star had just been spotted in the firmament. We shall hear more of him.

Haynes explained that, whereas Highsmith’s crime stories often have a homoerotic undercurrent, here the same-sex relationship leads the couple inadvertently into activities then deemed criminal.

The picture is built upon borrowings and variations. This is the America of both Edward Hopper and Norman Rockwell. Blanchett confirmed that Vivian Maier, the great photographer, was a significant influence on Edward Lachman’s gorgeous Super 16mm images. Yes, Carol will be the subject of many PhD theses, but it surges with such juddering, largely suppressed emotion that the whiff of the pop-cultural senior common room will trouble only the most resistant observer. It is infuriating that distribution conventions mean domestic punters won’t get to see this superb film until “Oscar season” in late autumn.

Joaquin Phoenix plays a drunken, depressed philosophy professor who, while carrying on a relationship with Emma Stone’s bright student, overhears intelligence concerning a corrupt judge and wonders – first as a mere thought experiment – what would be the moral and personal consequences if he murdered the man. If challenged to compare it with an earlier work, one might suggest that it plays like a slightly inferior Crimes and Misdemeanours. The odd mix of moral philosophy and wry humour kicks Inconvenient Man into the middle rank of Woody Allen’s oeuvre.

Also playing out of competition was Asif Kapadia’s fine Amy, a study of Amy Winehouse’s rise and sad, slow decline towards death from alcohol poisoning in 2011. Kapadia has stuck with the purist techniques he used for his classic film on Ayrton Senna: fresh interviewees appear only in audio; there are no newly recorded talking heads. The result is a work of visual integrity that allows some participants to shine and others to damn themselves.

Mitch Winehouse, the singer’s dad, has complained that Kapadia stitched him up. We don’t know. But the film certainly allows us to conclude that Mitch might have tried a little harder to get Amy off the terrifying arsenal of drugs that did for her.

There are some sour flavours. For its second hour, Amy discuss its complex subject simply in terms of her addiction, reminding us of the tabloids that latched on to her as a trigger for feigned shock. The closing tributes do, however, leave us mourning a great character and wondering where that talent might have brought her. Essential.

The Trek theory is looking good.

It is time for a sharp inhale, people. Sally Rooney’s Normal People is superb
Real news has value SUBSCRIBE