The director, who has died aged 76, created a diverse range of hits during his career 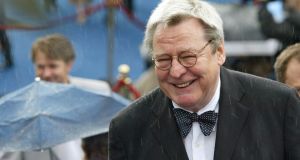 Sir Alan Parker, who has died at the age of 76, was one among a wave of British directors – Ridley Scott and Adrian Lyne were others – who emerged from the world of television advertising in the 1970s to dominate Hollywood.

Parker’s diverse slate of hits included Bugsy Malone, Midnight Express and Angel Heart, but, in Ireland, he will always be best remembered for directing the raucous 1991 musical The Commitments and the classy 1999 adaptation of Frank McCourt’s Angela’s Ashes.

The Commitments, adapted from a hit novel by Roddy Doyle, offered a startling snapshot of early 1990s Dublin and – following on from Jim Sheridan’s My Left Foot – helped kickstart a cultural renaissance in the capital. Following a rough soul band as they negotiate a city still unbitten by the Celtic Tiger, the film launched the careers of such stars as Bronagh Gallagher, Glen Hansard and Maria Doyle Kennedy.

“I cast everybody to be very close to the character that they play in the film. They’re not really playing outside of who they are as people,” Parker later said. “Most of them hadn’t acted before. I used to wake up in the morning, and I couldn’t wait to get to work.”

He formed a close friendship with Michael Dwyer, this newspaper’s former film correspondent, which survived until the journalist’s death in 2010.

Parker’s version of Angela’s Ashes was not quite so successful, but the film offered an honourable translation of Frank McCourt’s Limerick memoir to the big screen. Emily Watson and Robert Carlyle were touching as, respectively, long-suffering mother and wastrel father to the young Frank.

Parker was amused by the divergent views he encountered on the book when walking the streets of Limerick. “My personal impression is that everyone you meet in Limerick of a certain age falls into one of two distinct camps,” he said. “Half of them claim that this uppity, now affluent, Irish Yank exaggerated his childhood plight. The other half of Limerick seemed to have lived next door to the McCourts.”

Parker was born into a working-class family in a then still-rowdy Islington. His dad was a house painter and his mother was a dressmaker. His first interest was photography, but he remembers no great ambitions to move into motion pictures. In the early 1960s, he secured work as an office boy in the post room of an advertising agency. Like a male Peggy Olson from Mad Men (and at exactly the same time), he was encouraged to move from clerical work to copywriting on major accounts.

In the 1970s, he directed some of the most memorable commercials of the age. Meanwhile, he was writing scripts and shooting TV movies.

His first feature film seems like an even odder beast now than it did on release in 1976. Starring a then-ascendant Jodie Foster, Bugsy Malone was a musical parody of classic gangster films that featured children in all roles. The romantic scenes would be hard to sell in 2020, but the picture was a success.

Parker’s next picture – Midnight Express – now looks like a pointed effort to demonstrate the eclecticism for which he subsequently became renowned. “They were such opposite kinds of film that it sort of set me in a pattern of doing different things each time,” he said.

Midnight Express followed the story of Billy Hayes, jailed in Turkey for drug smuggling, and was a searing, sometimes shocking drama that profited from a pounding score by Giorgio Moroder and an uninhibited script by Oliver Stone. It received six Oscar nominations; Stone won best adapted screenplay.

The only common characteristics of the films that followed were a firm grasp of character, a focus on rooted performance and an affection for strong story arcs. Fame, dealing with New York’s High School of Performing Arts, generated one of the most popular TV series of the late 1980s. The underrated Shoot the Moon was a family drama starring Diane Keaton and Albert Finney. Pink Floyd – The Wall, starring Bob Geldof, struggled gallantly to make cinematic sense of that sprawling concept album.

Later films included his adaptation of Evita, starring Madonna, and the satire The Road to Wellville. Then, in 2003, his busy career came to a puzzling halt with The Life of David Gale. The film, a drama about the death penalty, was not a success, but few would have guessed that – while Ridley Scott continued to churn out a film a year – Parker would never release another theatrical feature. It seems he just got sick of greasing up the executives.

“I found the whole process of raising the money for a film debilitating,” he told the Guardian in 2017. “Whenever I go to the cash machine outside my local Tesco’s, I see this guy who sits there nursing his dog in his lap, with his hand outstretched. I suddenly thought, that’s me – except, instead of a dog in my lap, I have my script.”

His second wife, the producer Lisa Moran, survives him.