Why is the spirit of experimentation and absent from literary arts? 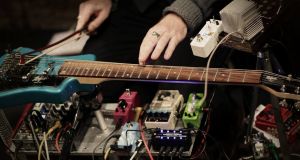 At Phonica: One, Sue Rainsford dipped the pages she was reading from and notebooks she kept towards her evolving novella in water, emphasising the fluidity of process and content; James King merged sound poetry and physical performance involving a typewriter at Phonica: Two; the climax of Phonica: Four saw Santiago-born, Paris-based poet Martín Bakero read from a burning copy of Finnegans Wake as part of a sound, light and bubble-infused session assisted by Elisa Matilde; Ásta Fanney Sigurðardóttir travelled from Reykjavik to undermine expected tropes in “spoken word” at Phonica: Five through a semi-improvisational set that elicited a gentle but sharply-observed conversation with the audience; as a result of Claire Potter’s last-minute inability to travel from the north of England for Phonica: Six, she devised, produced and delivered in a couple of frenzied days a specially-composed short film & accompanying script that required my own live contribution to the screening, which resulted in our interaction across medium, space and time.

Encountering the unexpected in the literary and sonic arts through explorations of compositional ideas embedded in their presentation has become one of the hallmarks of Phonica events. So, what is Phonica? Founded by myself and Olesya Zdorovetska in January 2016, Phonica is a Dublin-based performance series rooted in “word” and “sound” (ie encompassing realms wider than literature and music) that aims to bring artists and audiences from different artforms into the same presentational space. In each event, three of the participating artists or acts come, broadly, from the literature sector, and three from music.

Over the course of the series we have strayed into other artistic territories, incorporating contributions from visual artists, performance artists and writers/artists working in the science/technology sectors.

We’re particularly interested in the international dimension, and we’ve regularly introduced writers, artists and musicians from Europe, Asia, Australasia and the Americas to Dublin audiences.

Often the performances delivered on Phonica nights are devised in the run-up to the events. This requires a compositional attitude that elevates process and human interaction to a position at least as important as product. Although quality is never compromised, our curatorial approach aims to draw out new and evolving ideas from artists established or well on their way to being established in their fields and with a record of working in innovative ways, presented in formats that showcase and enhance their practice.

We encourage improvisation – and while not everyone takes up this challenge, there have been several instances of it primarily through collaborations between musicians: Kazakhstan-born vocalist Nazgul Shukaeva’s collaboration with electroacoustic musicians IRIDE Project at Phonica: Six was developed a couple of hours before the event and delivered unrehearsed; Ukraine’s Mark Tokar on double bass with Cork sound artists The Quiet Club and Olesya Zdorovetska at Phonica: Seven was an entirely impromptu session.

This spirit of experimentation and shackle-breaking is largely absent from the literary arts, particularly in Ireland, and part of the raison d’être of Phonica is to blur lines between artforms and encourage a cross-pollination of ideas that may kickstart new approaches to composition.

At the same time, audiences have the opportunity to discover artists from territories and genres they would not normally encounter, but whose work may strike a chord.

With regard to literature in particular, I have consistently noted an appetite towards a reboot of our understanding of what it is, what it can be and what it can do. Given a willingness to step outside personal concerns and remain in a receptive and questioning state, working across artforms and borders offers a way out of habits that regurgitate entrenched ideas of composition, and in extension ways of thinking and being.

Several of the performances scheduled for Phonica: Eight are, a week before the event, at the development stage. Still, there’s a lot of exciting information for me to divulge: in what is an Irish premiere, Joanna Walsh will present her own polyphonic adaptation of her digital novella Seed with the assistance of women amateur readers she is in the process of recruiting; US-born, Sligo-based poet Alice Lyons and literary translator Justyn Hunia are working on a poetic collaboration based on Justyn’s ongoing documentary work about his grandmother in rural Poland; SJ Fowler, a poet and artist operating at the vanguard of Britain’s innovative literary arts and with a wealth of cutting edge projects behind him, is preparing an audiovisual performance of an as yet unspecified nature. In addition, as part of the sound element of Phonica: Eight, Benjamin Dwyer (with the participation of Jonathan Creasy on percussion and Nick Roth on saxophone & electronics) will deliver a sonic take on Samuel Beckett’s Neither.

Christodoulos Makris has published several books, pamphlets, artist’s books and other poetry objects, most recently Browsing History (zimZalla avant objects, 2018). He is the poetry editor of gorse journal and Gorse Editions, and co-director of Phonica.