Neil Hegarty’s novel is shadowed not only by a young girl’s death, but by a more radical loss of innocence 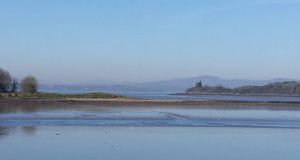 Inch Levels: once the site of a railway line, and now a nature reserve, it records the unstable presence of man in the natural landscape, and the gradual erasure of the past

Inch Levels is a stretch of reclaimed land on the shores of Lough Swilly. Once the site of a railway line, and now a nature reserve, it records the unstable presence of man in the natural landscape, and the gradual erasure of the past from our physical environment. As the setting of this novel’s pivotal act of violence, Inch Levels also highlights the role of secrecy, and of repressed memory, in the lives of its characters. It portrays the marginal spaces of Northern Ireland as sites of shared experience, to which the characters keep returning, in body or in memory.

Set in Derry, Inch Levels traces how experiences in Northern Ireland, from the second World War onwards, have shaped the fate of a single family: Sarah Jackson, the repressed and judgmental mother; Martin, her pacifying husband; and children Margaret and Patrick – bound together by a strange and destructive loyalty. Two other figures inhabit the margins of this family unit – Cassie, the housekeeper in Sarah’s childhood home, part-confidante, part-servant, and Robert, Margaret’s troubled husband. The profound detachment of these characters from one another, as well as from their own past selves, creates a challenging moral landscape for the reader. As well as exploring the dark recesses of one family’s experience, Inch Levels troubles our capacity to recover truth from a compromised past.

Despite this emotional detachment, and the memorable inner voices that both preserve and rupture privacy, Inch Levels is a novel of acute sensory expression, a book in which the body, despite – or perhaps because of – its frailty, mediates experience unflinchingly. As befits a novel of liminal spaces, physical sensation is often most fiercely present as it is being extinguished. The book opens with the poignant image of the final moments of a young girl’s life, rendered cinematically and with chilling intensity. This scene is the book’s imaginative touchstone, and is reinforced later by other examples of death-in-life: Patrick’s wasted body stretched on the hospital bed; the Bloody Sunday protester moments before he is shot dead; Margaret, who becomes “less substantial… more hollow” in the course of her hospital visits.

Suffering is caused as much by self-deception, wilful confusion and sheer ill-luck as by evil

So the novel is shadowed not only by a young girl’s death, but by a more radical loss of innocence; in 1980s Derry, freedom and safety are compromised, and though political violence is kept at a distance in this novel, its moral repercussions are registered in the landscape, much as the windows of the Jacksons’ house bulge, “but [do] not quite explode” when yet another bomb goes off. The precarious nature of life is registered both privately and publicly, and the two are fatally entwined here in concealed strands of physical and psychological abuse, and their clumsy perpetuation by the next generation. Suffering is caused as much by self-deception, wilful confusion and sheer ill-luck as by evil.

All the characters in this novel are restricted by their circumstances, and damaged by the punitive conditions of their younger lives. Images of physical entrapment are everywhere in the book – Patrick prone in his neat hospital bed, Sarah rooted in the semi-darkness of her violent childhood home, the two siblings trapped behind a phone box as snipers open fire on Bloody Sunday. These images are indicative of larger social constraints, such as the near-invisible markers of gender – the women who are too bright and too forceful to be comfortable among their peers, and who prefer ill-advised marriage to more liberated and self-sustaining relationships.

Class is a pervasive factor in these life choices and is delicately traced here, revealing the uneven effects of political turmoil. The Jacksons’ ostentatiously comfortable suburban home functions as a protected space, but the boundaries between inside and outside are permeable – the modish garden is always visible from indoors, and private conversations are overheard from outside. There is no freedom in this movement, however; instead the impression is one of surveillance, reflecting the militarised conditions of Sarah’s wartime childhood and the more pressing impact of the Troubles.

The almost-absent centre of the novel is Bloody Sunday, a turning-point in the history of Northern Ireland, and an event that would shape later representations of the Troubles in important ways. Though pivotal in the public sphere, Bloody Sunday is just one of a series of traumatic episodes in Inch Levels. It leaves an enduring mark on Margaret and Patrick, yet it is almost obscured amidst the confused memories of childhood, and its traumatic afterlife is seen obliquely. Though they know no one on the march, the siblings instinctively want to help those around them, and the fact that they must lie still, must efface their characters in order to save themselves, forces them unknowingly to repeat the actions of Sarah and Cassie when confronted with unexpected violence – to recognise the horror and turn away from it; to change their relationship with the space of traumatic memory; to adjust their way of being in the world.

Yet it is through these shared spaces and experiences that individuals are formed. Though it is a site of violence and concealment, Inch Levels is a landscape that offers solace: Sarah “never tired of this place… when her mass of duties and jobs began to eat at her, she could step out of that life and into this one, all air and a great sweep of sky”. It is at the more exposed Kinnagoe Bay that Patrick almost drowns, and where his decision to conceal his sister’s culpability sets the course of their adult relationship, which is shaped by an abrasive loyalty that finds little positive release.

In childhood, on the beach, we see their bodies released from the norms of middle-class convention, and acting according to impulse. Later, we will learn just how dark and unaccountable human instincts can be, and how resistant to rational explanation. This fleeting childhood accident is ironically juxtaposed to Patrick’s slow death, which shapes the pace and mood of the book and facilitates its vivid registration of past experience.

Patrick’s physical suffering is an outward manifestation of his repressed pain, and of the burden of secrecy that he bears, and it affirms both the intense significance of human experience and its terrible banality. The voices of gossiping nurses, the relentless sound of the school bell and the changes in light recorded through his lightly closed eyelids allow Patrick no peace. Capable neither of purposeful life, nor the release of death, he lingers between states recollecting – selectively, he admits – scenes from the shared past. Certain histories can be told; for others “we have to use our imaginations”.

The book’s carefully modulated narrative shifts assist in this act of memory and invention, creating the impression that we are at once moving through a tense human drama, and being pulled below the surface of the text by some as-yet-undisclosed traumatic event. Patrick’s postponement of revelation is a form of moral compromise, but it also suggests the challenges to representation that violence poses – the failure of language in the face of intense suffering.

Inch Levels, the place to which all the characters seem to return, is at once timeless and shaped by human activity, and as the imaginative focus of this novel it highlights the moral ambiguity of all actions. Though it is the location within which both positive and traumatic memories can be contained, it offers no hope of easy resolution or renewal. This equivocation is paradoxically the most satisfying aspect of the novel itself – by keeping faith with the complexity of human motivation it speaks of the power to endure without hope of resolution.
Lucy Collins is associate professor of English at University College Dublin