The churches, the peace process and reconciliation

Some frame the North’s conflict as ethnic, rather than sectarian, but the continued involvement of both churches in mediating for peace reveals their importance to the process 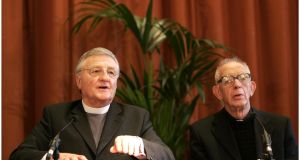 In April 2016, Protestant and Catholic church leaders met members of a recently formed group established with the aim of ending paramilitary violence. Following the meeting in Belfast, the church leaders released a joint statement with the Panel on Disbanding Paramilitary Groups, to say:

“Nearly 20 years on from the Good Friday Agreement, paramilitary violence and criminality remains an oppressive reality that pervades everyday life in many of our communities, particularly those in some of the most disadvantaged parts of Northern Ireland…. We pray for openness, co-operation and engagement on all sides… There genuinely needs to be a fresh start – bringing a sense of hope to those who have suffered through paramilitary activity in their communities and also pointing to a better way for those who have been involved in paramilitary organisations.”

The churches in Northern Ireland were entangled with the conflict from the start.

From its beginnings in 1968, to our current moment in 2018, the role of the Protestant and Catholic churches in mediation has evolved although their influence has waned. Some frame the conflict as ethnic, rather than sectarian, in nature but the continued involvement of both churches in mediating for peace reveals their importance to the process.

Catholic and Protestant clergy acted as negotiators between militant republicans and their political adversaries throughout the conflict; whether they were constitutional nationalists or members of the British government. Priests and reverends had historically adjudicated between opposing Irish groups and were thought to embody neutrality. As such, Catholic priests acted as mediators between the Officials and Provisionals in the early 1970s, and again between the Provisionals and the British government to secure the 1975 ceasefire. Equally, Protestant clergymen worked with the Provisional IRA and the British government in the Feakle talks which helped pave the way for the ceasefire.

Yet, by the early 1990s, some Protestant and Catholic clergy felt exploited by the paramilitary and political parties and antagonism between the Catholic Church hierarchy and militant republicans was high. With hindsight we now see that without the work of these priests and reverends, many potential avenues for dialogue may have failed or not even opened in the first place. Gerry Adams and John Hume were brought together through the work of Fr Alec Reid and Fr Gerry Reynolds of the Clonard Monastery, for example. Reid and Rev Harold Good independently verified decommissioning of paramilitary weapons. Their efforts demonstrate that during the peace process paramilitaries and politicians alike valued their services as mediators.

A new book, One Man, One God: The Peace Ministry of Fr Alec Reid, details Reid’s contribution to the peace process, most of which was too sensitive to be made public knowledge until recently. With their faith to guide them, these clergymen and women put everything on the line to further the cause of peace. Ultimately, it is unlikely the 1994 IRA ceasefire or the Belfast/Good Friday Agreement would have come to pass without the work of religious leaders.

What is crucial to remember, however, is that the most influential contributions to the peace process came not from the institutional churches but from passionate clerical individuals. Among those leading the way were Frs Alec Reid, Gerry Reynolds and Des Wilson, Revs John Dunlop, Ken Newell, Roy Magee, Harold Good, Gary Mason and Lesley Carroll, and Sr Geraldine Smith. All acted as individuals driven by the palpable sense of the duty of Christians to strive for peace. Gone were the days when the Irish hierarchy could only make statements condemning violence; action was now required.

Reid in particular won widespread admiration for his work as a mediator. Many in the republican movement trusted him. The priest played a significant role in verifying that the IRA had decommissioned along with Rev Harold Good, a former president of the Methodist Church in Ireland. Their work would go on to impact the peace process in the Basque country and illustrate the value of decommissioning. In December 1994, the Tipperary Peace Convention gave its Peace Award to Reid, Presbyterian minister Roy Magee, and the former Irish government adviser Dr Martin Mansergh, for their joint efforts in bringing about the ceasefires. The long-time public friendship between Presbyterian minister Rev Ken Newell and Fr Gerry Reynolds also aided efforts as their relationship showed what could be possible in terms of being Christian in Northern Ireland.

Of course, there were official contributions from the churches, most notably Bishop Edward Daly holding talks with Sinn Féin in 1992 and 1993. Daly’s status demonstrated that the Catholic Church as an institution backed the peace process, and his talks paved the way for more public discussions between republicans, unionists, and the British government. There were also the private efforts behind the closed doors of Clonard Monastery or the Bishop’s House in Derry and the 1991 Newry Cathedral sanctuary claim.

However, by the 1990s the newspaper headlines had replaced references to church involvement with the names of individual clergymen and women, bishops or cardinals. In this way, the peace process appeared to transcend the religious divide as it was the actions of individuals, not their institutions that were being presented as making progress. Headlines of another kind, however, were exposing and tarnishing the reputation of the Catholic Church as a whole. Revelations of clerical child abuse meant that as the 1990s progressed, it was only a few, trusted priests who could facilitate dialogue with paramilitaries.

Institutional churches have struggled to promote their role in reconciliation and peacebuilding since the Good Friday Agreement. Largely things have been left to individuals, like Fr Martin Magill, Fr Gerry O’Hanlon, and Rev Steve Stockman, as to cross-community groups such as Community Relations Council, Corrymeela, Healing Through Remembering, and the WAVE Trauma Centre, to build on reconciliatory work in Northern Ireland. For example, in February 2018, at the 4 Corners Festival in Belfast, Rev Karen Sethuraman, pastor of the Down Community, apologised for the churches pressuring people to “forgive”. Speakers at the “Blessed are the Peacemakers” event acknowledged that churches need to do more to begin these difficult conversations on how to “deal with the past” in Northern Ireland.

The churches have struggled to provide meaningful avenues for reconciliation in Northern Ireland since the Agreement. No longer are the leaders of these churches looked to for guidance as they were in the 1960s, ’70s, and ’80s. As it was through the peace process in the 1990s and decommissioning, it remains up to individual clergymen and women, as well as organisations other than institutional churches, to pave the way towards reconciliation.
Dr Maggie Scull is a teaching fellow in modern British and Irish history at King’s College London. She is preparing a book on the Catholic Church’s response to the conflict in Northern Ireland. This article forms part of #Agreement20, an academic public engagement project organised between the University of Salford and King’s College London, featuring a conference hosted by the Irish World Heritage Centre in Manchester and funded by the Department of Foreign Affairs and Trade on April 6th and 7th, 2018