Brief reviews of Bowie’s Books, Fate, The Hungry and the Fat, Performing the Unstageable, Can I Say No? and How to Raise a Reader 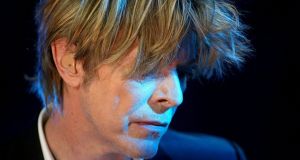 Singer David Bowie made a list, three years before he died, of the 100 books that had changed his life. Photograph: Fabrice Coffrini/EPA

David Bowie was a voracious reader and made a list, three years before he died, of the 100 books that had changed his life. These had fuelled his creativity, shaped who he was, and they provide a new way of understanding him. For each book, John O’Connell provides a short, insightful essay and pairs it with a Bowie song. Perhaps surprisingly, only eight books are concerned directly with musical subjects, while 12 relate to various aspects of the visual arts. Some are about mental illness; his half-brother Terry had schizophrenia and died by suicide and Bowie battled depression. There are some interesting poetry choices such as Dante’s Inferno and Homer’s Iliad. Of the eclectic novel collection, some are predictable but many are certainly not, and black people’s and outsiders’ experiences characterise the non-fiction. – Brian Maye

In a sequence of short chapters, we visit the lives of a taxidermist, a musician, a meteorologist and a boy. Each one is living an apparently ordinary life. But each life is particular to the person living it. They must sustain a sense of meaning and purpose and push for an acceptable level of contentment. How much will each life change through their own intentions or because of decisions made by those they interact with? There are important bonds between some of the characters but the structure of this intriguing novel emphasises each individual’s essential aloneness. Jorge Consiglio skilfully lowers us into these lives as they experience restlessness or unanticipated opportunities. Just as swiftly, he leaves us to wonder how these unresolved lives will proceed. – Declan O’Driscoll

The Hungry and the Fat
By Timur Vermes
MacLehose Press, £16.99

In the near future of Timur Vermes’ latest novel, Europe’s borders are closed to asylum seekers and even Germany has imposed a fixed limit on the numbers of refugees entering the country. Millions wait in the purgatory of camps built beyond the Sahara – for nothing. Until German reality TV star Nadeche Hackenbusch arrives with a camera crew and the world starts to watch. In the days of populist regimes and Twitter politics, satire has been almost outdone by reality. But in Vermes’ hands, truth, reality and possibility become weapons in his battle against apathy and division.

Translated with a mouth-watering sharpness by Jamie Bulloch, this latest novel from the author of the controversial Who’s Back, is a caustic and clever satire with a powerful emotional core that constantly challenges the reader to question the humanity of global relations. – Becky Long

Performing The Unstageable
By Karen Quigley
Methuen Drama, from £64

Quigley’s new book takes us into the rehearsals rooms and across the centuries with an impressive array of references to a collection of well known and forgotten texts along the way. Though from time to time the book gets stuck in the kind of gluey jargon one would hear in academia and often, unconsciously, puts the academic’s chicken before the playwright’s egg, its great strength lies in Quigley’s excavation of the results that followed, intentionally or accidentally, after a director encountered what they considered an impossible or seemingly impossible stage direction in a text and how in resolving such problems they stretched the canvas on which the play could be reimagined, usually for the better. – Jimmy Murphy

Yes, you can say no, but beware of consequences. In this half-memoir, half-self-help book Stefanie Preissner details her journey from a people-pleasing “yes woman” to a staunch “no woman”. The book reads like a 300-page interview with the author – unfiltered and unedited – and her tone is toasty warm, conversational and honest. She offers a very balanced though long-winded look at what life is like when you begin to say no to things – the friends you can lose (some of these anecdotes are startling honest), the events you won’t attend and the correlating repercussions on your mental health. A great read for older teenagers and young adults who are finding their feet in an anxiety-inducing society. – Mia Colleran

How to Raise a Reader
By Pamela Paul and Maria Russo
Workman, £15.99

Finally, the book we needed has arrived. Worried bookworms, worry no more. Pamela and Maria have penned a reading companion guide which leaves no reading age unexplored and no common worries unaddressed. Their combined knowledge of children’s books is boundless, their love of literature is infectious and their inventive approaches to “raising a reader” will inspire hope in any parent. The book is divided into five main sections; four of which cover the various stages of reading and a fifth section which is solely dedicated to reading lists for all reading levels. Filled with excellent advice for children and adults alike, this is a book that will be constantly referred to in any household of budding or avid readers. – Mia Colleran