With low overheads and sky-high ticket prices, Hillary Live is a book tour like no other 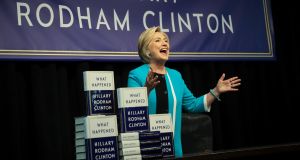 On the website of the world’s biggest live music promoter, Live Nation, Hillary Clinton is listed, beside Guns N’ Roses and Ed Sheeran, as an “artist”.

Clinton has just begun a four-month tour to promote her recently published new political memoir, What Happened, and like a many touring act she will be glad that the first show of Hillary Live on Monday, September 18th in Washington, DC was a resounding success. The 1,847-capacity audience welcomed her with a sustained standing ovation.

With great first-night reviews and several shows already sold out, more dates are likely to be added to this four-month North American tour. Clinton has 15 shows listed so far and will play – or talk – to 1,500-2,000 each night.

Clinton is not yet a threat to the Live Nation band that currently have the biggest selling tour of the year: U2. But the Clinton events will be highly profitable in their own right, due to their high ticket prices and low production costs.

Hillary Live is not a U2 gig, or a Cirque du Soleil-style son-et-lumière extravaganza. There is no cast of dozens, no major equipment, props, lights or sound equipment.

Her live event promises “a raw and personal evening with her guard really being let down” concerning the events of last year’s fractious US presidential election campaign.

There is huge interest in her insider take on Donald Trump, Russian interference, Barack Obama, Bernie Sanders and James Comey.

And that interest is reflected in the ticket prices, which vary wildly. While there are plenty of seats around the €50 mark, a “VIP platinum” ticket can cost more than €1,000. Despite the show being of relatively short duration and featuring only one person, these prices are far in excess of what anyone else on the Ticketmaster website is charging.

Clinton’s own Hillary Live website (hillaryclintonbooktour.com) sets out the ticketing prices. To see the show at Toronto’s Enercare Centre on September 28th, the top price ticket is €2,060 for two VIP platinum tickets, which get you “a front row seat and a backstage meet and greet with photo”.

The next price level of ticket for Hillary Live in Toronto is the ordinary “VIP” ticket. For €157 you get to sit in the Enercare Centre’s “VIP section” and receive a copy of What Happened (unsigned) which retails at around €25).

These prices represent a steep increase on the usual “VIP” packages for music shows – where a full buffet and free bar would be thrown in. There’s not even a vol-au-vent on offer for Hillary Live VIP ticket holders.

Hillary Live is the first significant live tour by a leading politician, and is under scrutiny not just for its ticket prices but it’s tour itinerary.

The Los Angeles Times has acidly noticed that, while Clinton controversially didn’t go to the state of Wisconsin during last year’s presidential campaign (which even her aides say contributed to Trump taking the White House – as the reliably Democratic state turned Republican), she is visiting Wisconsin this time – to boost her book sales.

Clinton is a natural for the showbiz economy. Like all travelling acts, she knows that time is money. Apart from the evening shows, there is a parallel afternoon book-signing tour.

Attendees are warned that once they’ve bought a copy of the book and want to get it signed, that “Hillary will not be personalising books (she just signs “Hillary” in all of them) and will not sign memorabilia of any kind”. There are no photo opportunities with the author, including selfies. Photos are available only for €1,000 at the evening shows.

There is no reliable information available on what her advance was for What Happened but given that her publishers are billing it as “her most personal and least guarded” memoir to date and that it covers a controversial election race, it is likely to be more than she received for Hard Choices.

Despite getting mixed reviews, the new book is selling in large numbers. What will significantly increase sales over the next few months is a number of prime-time TV chat show appearances, her book-signing sessions and her Hillary Live dates. Those TV networks who had complained about their lack of access to Clinton during the Presidential campaign now find her readily available.

Meanwhile, former White House press secretary Sean Spicer is also being aggressively marketed at the lucrative corporate speaking circuit. Spicer has just been signed up by the Worldwide Speakers Group who – in pitching him to prospective clients – say: “Audiences around the world will benefit from the same candor, wit and insight that Sean Spicer brought to the White House briefing room. We are thrilled to provide Sean for our major trade association, corporate, university and public lecture series customers around the world”.

For those unable to get to see a show on the Hillary Live tour over the next four months and unwilling to wait for a possible European leg of the tour next year, there is some good news.

All major tours now commemorate their existence with the release of a special-edition DVD (with bonus content). Expect the Hillary Live DVD to be available just in time for the Christmas market.