Childless women in an unforgiving society 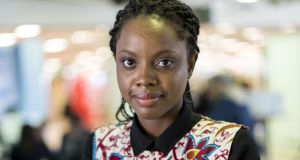 Ayobami Adebayo: her novel does not change so much as evolve, with an impressive emotional intelligence. Photograph: David Levenson/Getty Images

Book Title:
Stay With Me

Intent resonates from the opening sentence: “I must leave this city today and come to you.” Young Nigerian writer Ayobami Adebayo strikes a tone of persuasive urgency which is oddly classical, even plaintive, despite its shimmering defiance. “I will not miss the few friends I made . . . Nobody here knows I’m still married to you. I only tell them a slice of the story: I was barren and my husband took another wife.”

The date at the top of the first page may be 2008 yet there is something far more ancient at work; life itself and the plight of childless women in a society where fertility defines personal worth. It is as if Adebayo had decided that story at its most complex – and most human – is her surest ally.

Ignore all the yellow on the cover, the facing pages and on borders of each page. Physically this book is fluorescent. Sunny is the adjective best describing Adebayo’s enthralling debut at first glance, and sunny it is for some of the journey. Only it does become progressively dark and true, as well as tragic. Stay With Me strikes deep from the outset and regardless of the tonal shifts, does not change so much as evolve, with an impressive emotional intelligence.

The central character, Yejide, matures with each harsh new experience. She could be a heroine from mythology enduring a series of tests. Initially there is a hint of comedy and lively dialogue. Yejide, though an outsider, is opinionated and confident of her allure. Aware since childhood that in her father’s eyes – and in those of the household – she had always been the child whose birth had killed her mother, a staunchly philosophical streak sustains her sense of self. She was the child upon whom his other wives frowned and excluded from the bedtime stories told to their untainted children. Even so she had flourished, gone to university and graduated, in what is not quite clear.

She sets up a hairdressing business. Between the weary if slightly hopeful woman we meet briefly at the beginning and the girl she quickly reverts to being as the story unfolds, is a gulf of living and suffering. The solemn speaker sets out on a journey back to allow her younger, irrepressible self to explain what happened. So the clock goes back to 1985 when a cherished young wife is about to have her dreams shattered by a communal decision about to be imposed upon her.

The older women of the family have gathered. Yejide heard them arriving. “I wanted to leave them standing outside and go back upstairs to sleep. Maybe they would melt into pools of brown mud if they stayed long enough in the sun. Iya Martha’s buttocks were so big that, if melted, they would have taken up all the space on the concrete steps that led up to our doorway.”

Yejide candidly expects them to discuss her childlessness and is ready with “millions of smiles. Apologetic smiles, pity-me-smiles, I-look-unto-God smiles”. Having already undergone weird fertility rituals, she is prepared to tolerate more. But this time it is different; a stranger is introduced, an even younger woman who has been selected as a second wife. Yejide’s humiliation is compounded by the passive response of her husband, Akin, to this news.

Witty and knowing, if also agreeably naive, she immediately consolidates our sympathy by preparing a meal for her visitors. “I gave them bean pottage. I mixed the three-day-old beans I had been planning to throw in the bin . . . ” The resulting food-poisoning has spectacular results and confirms Yejide as a resourceful battler. Goaded by the presence of Funmi, the simpering second wife who can also speak English, Yejide intensifies her efforts to become pregnant, and before her rival does.

The dream of having a baby convinces her to climb the Mountain of Jaw-Dropping Miracles. It is worth a try. In the most memorable set piece in the novel, Yejide struggles up to the summit bearing a white goat “without blemish” to appease the prophet waiting there. As part of the ceremony she has to breast-feed the kid. Assured by the demented holy men that she will soon be pregnant, she then enters a year-long phantom pregnancy which is vividly, and amusingly, described.

But for all the humour and the fluid, rhythmic ease of Adebayo’s narrative skills, whether writing through the voice of her heroine, or that of the far less compelling husband Akin, this is a painful story of how life implodes. Romance yields to harsh reality as Yejide’s good-natured optimism is ground down by Akin’s complicated treachery which is both cruel and pathetic.

Babies are born and with them the spectre of sickle-cell anaemia. First World medicine is balanced against traditional responses to death, including parents being forbidden to see the burial place of a child.

As time passes Yejide is soured by loss. The girl who had once noted a neighbour’s agitated state by remarking: “Her eyes opened wider with each word until they looked like they might pop out and roll under a chair”, eventually loses her sense of fun. Numbed, she withdraws from the prospect of further grief.

There are a couple of instances when it seems Adebayo may be losing her feel for Yejide and it sounds overly formal when our heroine says that she met Akin “when I was in my penultimate year at the University of Ife”. Elsewhere she says: “I administered paracetamol” as if she was being questioned by the police.

So appealing a character is Yejide that it does seem a shame that Adebayo did not either strengthen or abandon the narrative sequences related by the weak, cowardly Akin whose grasp of reality, never mind fair play, borders on the delusional.

Equally, references to the political unrest in Nigeria are surprisingly vague considering Yejide is educated. Recently shortlisted for this year’s Bailey’s Prize, Stay With Me does falter in its closing sequences, yet this weariness could also be seen to reflect the trials suffered by the characters. As a family drama it touches the emotions through its realistic portrayal of hope, sorrow and all too human weakness.