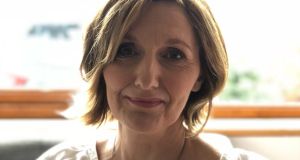 Anne Griffin: ‘Give me a good plot, engaging characters no matter how flawed, and I’m there, lost in the world of make believe’

A few years back, while cycling the Mayo Greenway, I met an elderly man at a hotel bar. He had a head of white hair and a voice that was deep and melodious. Amongst other things he told me he’d worked in the hotel as a boy, not that it was a hotel back then.

He enchanted me. It was no surprise, I’d a history of listening to quiet men tell stories in hushed rooms. In him I heard the gentle voices of my father and uncles.

My time with this man was to be brief. We spoke only for a few minutes before he began to say his goodbyes. But just as he finally turned away he said these words: “I’ll not see the morning.”

It was then he left. Too late to pull him back to ask what he had meant, his words seeped into the heart of me as I watched the spot he had vacated. I wondered what it was that had brought him to tell a stranger such a thing. I knew then, that this man with his kindly worn face, his openness, had just given me a precious gift no writer could ignore - the inspiration for a story.

But it is the written word that has truly won my heart. I attribute my addiction to Jane Austen and to Doris Lessing

The next day I cycled the final leg of the Greenway. As the wind and rain moved in off the Atlantic I began to write about a man I call Maurice Hannigan. In When All Is Said, my debut novel, this master storyteller sits at a bar to raise five toasts to five important people, unlocking his life’s triumphs and failures, his loves, his losses, unfolding the reason why he has chosen that particular night to sit at this significant bar.

Sheila O’Flanagan recently wrote a piece for The Ticket calling for nothing to get in the way of a good story; especially not an industry that insists on categorising novels into literary and popular fiction. Yes, I applauded from my couch, great prose and humour can pull a reader in but it is a story’s ability to entertain that remains its greatest gift.

I’m a sucker for a good story. No matter what the format: written, spoken, on screen, on stage. Give me a good plot, engaging characters no matter how flawed, and I’m there, lost in the world of make believe.

When I was little, my dad would make up stories to get me to sleep. My favourite being about a pair of slippers, called Jean and Anne, coincidentally my name and the name of my older sister. These slippers got into quite a bit of trouble every day from not doing as their mammy had told them, to running away up Annaville Avenue making an awful racket outside Mrs Turner’s house on the corner.

At 88, my father can still fill a rainy Sunday afternoon with tales from his childhood: the government car packed with bodyguards that brought de Valera home along Booterstown Avenue after his day’s work in Government Buildings, or the delivery man who mistook Mrs de Valera as the housemaid when he brought back their re-sprung mattress.

Storytelling runs on my mother’s side too. As children, on our summer holidays, cousins would gather to listen to my uncles – two quiet men who could, nevertheless, hold the attention of the fill of my grandmother’s kitchen in Wexford.

Their stories were of neighbours and people who lived over the hill with names I didn’t know. I was enthralled by their histories, their tragedies, the supernatural occurrences. Both men sat side by side at the Aga working in a seamless partnership, the baton passing back and forth smoothly, neither one talking over the other. When one of them died two years ago, my remaining uncle took up the lone mantle and once again, the sons, the daughters, the nieces, the nephews, and now the grandchildren, sat and listened to him repeat the stories of our childhoods.

But it is the written word that has truly won my heart. I attribute my addiction to Jane Austen and to Doris Lessing whose short story To Room Nineteen depicted the world of a woman in crisis. At 18, these women catapulted me into worlds that took me away, making me laugh and quite often cry. I was so hooked that one day I missed my bus stop on my way into work.

In time, I found Mary Lawson, Anne Tyler, William Trevor and Richard Russo (my go to writer who never disappoints - read him for sharp witty dialogue and loveable flawed characters). Every one of these authors wraps me in stories that reflect what it is to be human, in all its beauty and viciousness. Their voices filling my head and the very blood that runs through my veins so I am wholly theirs.

Actors, spoken word artists and writers, we are all storytellers. Part of our purpose may be to teach or to inform, but above all, it is to entertain – to engage the imagination of the reader, the listener, the watcher.

‘When All Is Said’ by Anne Griffin is published by Sceptre in trade paperback on January 24th, at £12.99.
Anne Griffin, Sarah Davis Goff & Ian Maleney will discuss their debut books with Martin Doyle, Irish Times Books Editor, at Mountains to Sea DLR Book Festival. Booking from http://mountainstosea.ie/events/dazzling-debuts