Bojack Horseman: not puns or pastiche, but great comedy pedigree

The Netflix series, which has celebrity guests fighting for a place, is in it for the long run 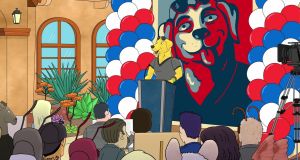 From the Hollywoo hills: A scene from Bojack Horseman

The longest face in Hollywoo (whose iconic showbiz sign lost its ‘D’ way back in series one) still belongs to Bojack Horseman (Netflix, streaming from Friday). When we left him, at the end of a majestically funny and courageously bleak series, Horseman, a celebrity also-ran from 1990s comedy Horsin’ Around, had experienced a temporary Bojackonnaisance, with his well-regarded performance in equine biopic Secretariat. But his toxic selfobsession, ruinous drug dependency and allergic reaction to responsibility spurred him into self-exile. This is the fate of Bojack, and most Hollywoo careers: to fall at every fence.

That gag, however, is both lacerating and lithe. In the first episode of the new series, from which Bojack is still missing, I marvelled at a wicked impersonation of Vincent D’Onofrio. In flashback, the character actor walks off David Chase’s 1992 Bojack spinoff with actorly petulance: “This D’Onofrio has had enoughrio.” But the credits reveal it to have really been D’Onofrio – and David Chase for that matter.

Celebrities are chomping at the bit to be in the show: Matthew Broderick, Jane Krakowski, Lin-Manuel Miranda and Sharon Horgan all make discreet appearances in coming episodes. The suspicion is not that they’re gamely in on this Hollywood joke, but that, at some worried level, they know they’re living it.

When Bojack does reappear he is chasing the unhappy spirits of his ancestors, until that gets old and he returns to Hollywoo, to be stalked by his biological daughter. This then, is the new focus of Bojack’s tragicomedy: not puns or pastiche but pedigree.

It’s a welcome return and great assurance that comedy can have depth. Bojack is in it for the long run.

Edinburgh festivals called off because of coronavirus pandemic

You Have to Make Your Own Fun Around Here: Lively debut novel
10