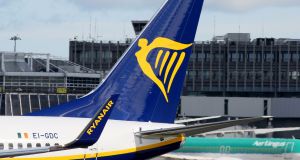 Ryanair had €4.5 billion in cash at the end of September. Photograph: Paul Faith/AFP/Getty Images

News that Ryanair Holdings is close to confirming a new order with aircraft manufacturer Boeing has industry observers speculating about what other deals the Irish airline might do to ensure that it has a strong position as it emerges from the Covid-19 crisis.

No one in aviation would have wished for a year like 2020. There is plenty of trepidation about 2021, while the industry generally accepts that recovery is likely to take three to four years. Those with the strongest balance sheets and the lowest costs will have obvious advantages, which they will be able to press home as normality re-asserts itself.

Ryanair is one of those. The group had €4.5 billion in cash at the end of September, while its costs are the lowest in Europe. A deal for new aircraft with Boeing is likely to involve a heavy discount – although some suggest the parties could play that down in any announcement – lowering costs further into the next decade.

Airports, which have seen traffic evaporate over the last nine months, will be keen to welcome Ryanair aircraft, giving the airline the leverage to negotiate long-term deals with them on passenger charges, knocking off yet more costs. Similarly, pay cuts and flexibility agreed with pilot and crew unions in lieu of redundancy, will keep labour costs low, at least through the initial stages of a recovery.

All this is going to give Ryanair the scope to grow more quickly than most rivals, assuming any recovery gets momentum. However, that is still an assumption. Vaccines are on the way, but there are still barriers.

On Wednesday, industry bodies, Airlines for Europe, Airports Council International – Europe and the International Air Transport Association, joined forces with other groups to call on governments to abolish Covid quarantines.

They point out that the European Centre for Disease Control and the EU Aviation Safety Agency say these measures don’t work where virus transmission is widespread. But governments have mostly ignored such calls in the past. So the mish-mash of travel restrictions is likely to remain a drag on any recovery for some time to come.