Airline opening new base at Stobart-owned airport in €255m investment 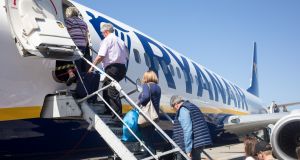 Ryanair will base three aeroplanes at London Southend. Photograph: Bloomberg

Ryanair has announced that it is opening a new London base at Southend airport, but warned it was not a “vote of confidence” in post-Brexit UK aviation.

The move will include a new twice-daily route to Dublin beginning in April next year.

It was not a “reversal of opinion on the merits of Brexit”, which Ryanair has vociferously opposed, Mr O’Brien said.

Ryanair will be basing three aeroplanes at London Southend, representing an investment of $300 million (€255 million) and more than 55 flights a week.

The airport is located in Essex, about 60 km from the centre of London.

Mr O’Brien also said Ryanair would stop its operations from Glasgow airport at the end of the summer, “not to be reopened for the foreseeable future”, because of the airport’s remoteness, decreasing demand and high air passenger duty.

Stobart Group is going through a period of turmoil as a former chief executive tries to oust the company’s chairman. Warwick Brady, chief executive of Stobart Group, said he had been telling shareholders that “the current management team and stability at the board level” would lead to growth.

“Ryanair’s commitment to London Southend is real sign of confidence in the management team and my leadership,” he said.

Earlier this week, Ryanair signed its second agreement to recognise a cabin crew union. This was with Unite, the British union, after an agreement with the Italian ANPAC/ANPAV unions.

Ryanair’s chief people officer Eddie Wilson said it showed the company was serious about its commitments to allow its staff to unionise. He said “practical and positive” unions in certain countries would yield further agreements, but “we are making less progress in some smaller countries where minor issues (such as days off for union officials) are unnecessarily delaying agreements”.

Ryanair has yet to reach agreement with its Spanish and Belgian unions, who have threatened to strike this summer if there is no resolution by June 30th.

In January, Stobart Air — the group’s airline — named former Ryanair executive Conor McCarthy as non-executive chairman of its board.