Voi, Tier and Bolt all planning to launch once legislation is passed 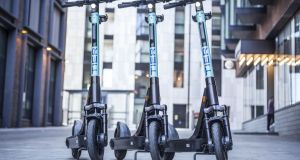 Tier is among a number of e-scooter rental companies keen to launch services here.

A number of international electric scooter rental companies are seeking to launch services in the Republic once legislation to permit the use of them on Irish roads is passed.

Sweden’s Voi and Berlin-based Tier have both signalled their intent to commence services as soon as is feasible. Californian company Lime said it has no immediate plans to launch locally but is “watching developments with interest”.

Bolt, an Estonian start-up which launched its taxi-hailing app in the Republic earlier this week, has also confirmed that it wishes to provide scooter services locally.

The move comes after the Minister for Transport and Green Party leader Eamon Ryan recently signalled he intended to bring a law to permit the use of e-scooters here shortly, with the intent of it being passed by the Oireachtas before Christmas.

Voi, which on Tuesday announced a $160 million fundraise to fuel expansion, was among a number of international scooter service providers who sent submissions to a public consultation held last year.

“Voi is eagerly looking forward to commencing operations in Ireland but will only do so when the legal and regulatory framework is clear, and we have permission to do so,” a spokesman told The Irish Times.

The company has racked up more than 30 million rides since it was launched two years ago and operates in more than 50 cities across 11 countries. It recently teamed up with Irish micromobility start-up Luna to use its sensor technology in its scooters in England.

Tier, which also recently raised funding from backers that include Japanese fund SoftBank, also said it was keen to launch services in the Republic as early as possible.

The company operates in 80 cities across 10 countries with 60,000 e-scooters available through its app. It launched in the UK recently via a 12-month trial in York.

“Ireland would be a really important market for us and when I say that I don’t just mean Dublin because, while we are in some of the biggest cities across Europe, we also operate in towns with less than 100,000 people so there is scope for us to be in a number of places,” said Fred Jones, general manager for UK and Ireland.

While both Ireland and Britain have lagged most other European jurisdictions in permitting e-scooters, Mr Jones said the delay could be of benefit as they would escape much of the pain some countries experienced when first allowing them. These include poorly designed scooters and issues around them being dumped on streets.

Under the planned legislation to be introduced shortly, e-scooters will be banned from footpaths and limited to 25kph, but users will not be obliged to hold any form of driving licence.

There were 37 reported collisions involving e-scooters to the end of October, according to figures provided to Sinn Féin with more than 90 scooters seized by gardaí to date.