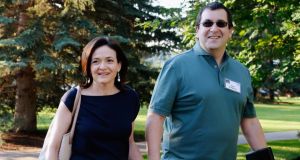 The 47-year-old father of two was a respected Silicon Valley entrepreneur whose death drew widespread industry tribute. A spokesperson for SurveyMonkey said the company, which was founded in 1999 by Ryan Finley, was “deeply saddened”.

“Dave’s genius, courage and leadership were overshadowed only by his compassion, friendship and heart,” SurveyMonkey said in a statement.

His brother, Robert Goldberg, described his family’s “incredible shock and sadness”, in an online post asking well-wishers to post photos and memories to his Facebook profile page.

Tributes to Mr Goldberg were posted to social media across the Silicon Valley community. A spokeperson for Facebook said it executives were “heartbroken by this news”.

Mark Zuckerberg, Facebook’s chief executive, said in a post that Mr Goldberg was “an amazing person and I am glad I got to know him”.

“One of the truly great people on the planet, Dave was of almost unimaginably remarkable character,” said Dick Costolo, Twitter’s chief executive.

A Harvard graduate, Mr Goldberg began his career as a Bain consultant before working at Capitol Records.

Mr Goldberg then led Yahoo’s music business for six years, during which time, in 2004, he married Ms Sandberg, then a senior sales executive at Google.

In April 2009, Mr Goldberg became chief executive of SurveyMonkey, where he pioneered the now-widespread approach of raising late-stage capital from private investors instead of going public.

In 2013, the company – which has been profitable for many years - joined Silicon Valley’s “$1 billion club” when it raised $800 million. It has more than 400 employees in its Palo Alto headquarters and around the world.