Review: Nest Wifi twin pack can improve connection to reach all around your house 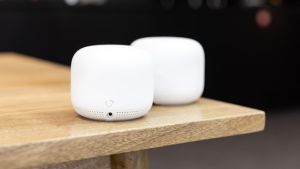 How good is your home wifi? Perhaps it’s mostly fine, but there are a few areas around the house where the wifi doesn’t quite reach. You can live with it, because you don’t need wifi absolutely everywhere in your home.

But what if you could make it better? That’s what Nest Wifi offers. Google’s latest product is a wifi hub that will help your broadband connection reach all around the house, and probably make it better while it’s at it.

This isn’t a new things as such. Google has been down this road before with Google Wifi, and it worked well. But in the meantime, the company has been rebranding a few things, so the latest version of the product now bears the Nest name instead.

The system works on a mesh network, which uses a series of overlapping nodes to create a strong, consistent wifi network in the home. One can be plugged directly into the modem, and you can then add others around the home, placed to make sure your wifi network has full coverage.

Once you are connected to the mesh network, you can move seamlessly between nodes.

The difference with the Nest wifi? The wifi points have Google Assistant built in, so you can control your smart home devices or add to your shopping lists.

Like its predecessor, set up on the wifi router is simple enough: plug it into your home wifi hub, hook it up to some power and then follow the instructions on the Google Home app. It talks you through the process quickly and clearly.

Once the main modem is connected, you can connect the extra wifi points.

Having Google Assistant built into the wifi points gives the system an extra edge. You can ask Google Assistant for the time, or to set a reminder, add to your shopping list or do a few simple conversions.

The results are localised to your Google account too. Asking it for the latest on coronavirus brought up The Irish Times podcast “Confronting Coronavirus” as the first option.

Because there are no lights on the speaker part, the device lights up underneath when you shout “Hey Google” at it; if you turn off the microphone with the manual button on the back, that light changes from white to orange. It’s a visual reminder that the mic is switched off.

While all those extras are nice to have, the key thing is how well the Nest Wifi works as a mesh network.

I’ve been using a Linksys Velop in my home for a couple of years now. Despite living in a fairly standard three-bedroom terraced house, the wifi signal didn’t reach all parts of the house. That was solved by putting all three nodes for the Velop system into my home – one on each floor. Without the third node, it didn’t reach the top floor of the house consistently.

The Nest Wifi did a better job with only two wifi nodes: the router plugged into the broadband modem downstairs; the second plugged in on the third floor. The two nodes couldn’t have been further apart in the house, but once the mesh network was up and running, the signal was as strong as the three-node network. It claims to cover homes up 3,800 sq ft, which should safely cover most average households.

The mesh network can also have up to 200 devices connected to the network, which can help if you have a smart home set up with multiple wifi plugs, lightbulbs, and a smart heating system. Not every modem will cope that well with so many connections.

The system works. It is simple to set up, it produces a strong and consistent internet connection, and it requires fewer things to be plugged in around your home.

If you don’t want a smart speaker, the system may not be for you. However, you can turn the microphone off.

You can add more nodes to the system if needed – €139 for each additional wifi point, which also have Google Assistant built in.

If you have a patchy, unreliable connection or just need a more robust network for your home, the Nest Wifi is worth the investment.

1 Penneys will not reopen on Monday despite expected changes to lockdown rules
2 Angela Merkel sweeps in to save the euro zone
3 Don’t expect a bonanza for Ireland from the EU’s €750bn recovery cash
4 What will it take to reopen the world to travel?
5 Biopharma company founder named EY World Entrepreneur of the Year
Real news has value SUBSCRIBE