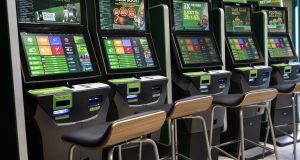 Studies have linked betting terminals to a rise in problem gambling in the UK. Photograph: Getty

The British government recently decided to cut the maximum that punters could wager on bookie shop betting machines at any one time to £2 from £100, but Mr Hammond postponed the reduction to October 2019 after bookmakers warned that it could cost thousand of jobs.

However, his colleague, culture minister Jeremy Wright, is expected to announce a U-turn on the policy on Wednesday, following pressure from campaigners and MPs to bring the date forward to April 2019.

Paddy Power Betfair, which has more than 300 UK bookie shops, estimates that the reduction would cost it £36 million to £46 million in a full year, but says it won’t result in either job losses or closures for the group.

The Irish group has also said that the impact of the cut on the overall industry was likely to be less severe than that outlined in a report commissioned by the Association of British Bookmakers.

Studies have linked the machines – called fixed-odds betting terminals, which allow punters to bet on games such as roulette and blackjack – to a rise in problem gambling in the UK. They are banned in the Republic.

A lengthy review resulted in the British government deciding to cut the maximum stake earlier this year in the face of claims that it would cost bookies £900 million.

The apparent about-turn comes a day after British government sources said the country’s finance ministry was holding firm in the face of a cross-party rebellion that left the Conservative Party administration facing the prospect of being the first to suffer defeat on its own budget bill since 1978.

More than 100 members of the British parliament – including Tory rebels such as Boris Johnson, Jacob Rees-Mogg and David Davis – had put their names to an amendment designed to force the government to bring forward the stake reduction.

Labour, the main opposition party, said it would support the amendment, meaning the government was all but certain to lose a vote that was expected to take place next week.

The final straw is thought to have been a letter sent to chief whip Julian Smith on Tuesday night by 12 parliamentary private secretaries, that is senior politicians who work for ministers.

They are understood to have urged the government to change course and avoid a needless and embarrassing defeat, particularly given that fraught negotiations over prime minister Theresa May’s Brexit deal are happening at the same time.

The change of heart means that an increase in the duty levied on online casinos will also be brought forward because it is designed to make up for tax revenue lost from the betting terminals. – Additional reporting: Guardian service