Republic falling behind in offering incentives for entrepreneurs 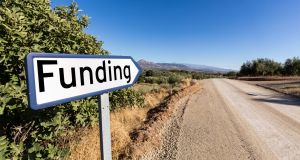 Incentives offered to entrepreneurs in other European countries are overtaking those provided here, according to a new report, which urges the State to do more to back growing businesses.

The study was conducted by DCU Business School on behalf of the Irish Venture Capital Association (IVCA).

“New tax incentives should be considered to encourage private capital away from passive assets to fund the future of Irish industry and the productive assets that will power the Irish economy over the next 15 years,” report author Dr Eric Clinton said.

The study comes after a new league table published by the Not Optional campaign last week showed the Republic ranks 11th out of 22 in a list of the best European countries for start-ups based on stock option policies.

According to the DCU report, the Republic is currently one of the worst national performers in Europe in terms of investments as a percentage of GDP.

Changes to the R&D tax credit and the key employee engagement programme (Keep) were announced in Budget 2020, although lobby group Scale Ireland has said take-up of the latter has been minimal due to a number of restrictions.

Overall, venture capital and private equity firms have invested €5 billion in Irish SMEs since 2003 the DCU study finds, with a further €3 billion coming through syndication with international investors.

The study shows there was a 115 per cent increase in the amount of capital raised by SMEs between 2016 and 2018 versus the previous three years. In addition, the number of funding rounds rose by 60 per cent.

The DCU study shows that over 25,000 high-value jobs have been created by VC-backed companies over the 15 years up to 2018.

1 Solar panels: Are they worth the investment?
2 Bank leaked my loan request to family who tried to rip me off
3 Longview seeks permission for 753 homes in Cork’s outskirts
4 When the Chemistry no longer works – the closing of a leading Irish ad agency
5 Packing company wrapped up in online, design and sustainability
6 Revolut valued at $5.5bn after latest fundraising
7 Hibernia Reit lets remaining space in 2WML building
8 Bank’s planning of bonuses smacks of fantasy
9 Ryanair and Aer Lingus monitor impact of coronavirus on travel to Italy
10 Stock markets have steadied after Monday’s dramatic falls
Real news has value SUBSCRIBE