Bank behaviour has caused people to take their own lives, solicitor claims 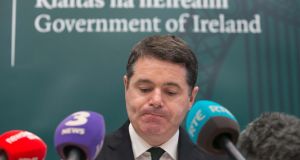 Minister for Finance Paschal Donohoe during a media briefing on the tracker mortgage scandal. Photograph: Collins

The behaviour of the banks has caused people to take their own lives, a solicitor who settled a tracker mortgage case last month has claimed.

Ballyhaunis solicitor Evan O’Dwyer settled the case for Maria Page against Permanent TSB. While the specific terms were not read out in court, it is understood that the settlement is for a sum that is a multiple of what was first offered by the bank, and that costs have also been awarded to Ms Page.

Tens of thousands of homeowners have potentially been caught up in the scandal, which saw banks wrongly refuse customers access to tracker mortgages after the crash. Some of those who were overcharged went on to struggle to meet their repayments, and some lost their homes through repossession.

Mr Dwyer described pledges by banks and the Government that customers who were caught up in the scandal would be compensated before Christmas he said as “a false carrot, a hollow carrot.

“It’s the most vulnerable time of the year for people when people need money,” he told the Pat Kenny show on Newstalk.

“How do you measure what has happened to people?” he asked.

Banks stopped offering tracker mortgages – which fixed interest rates at a set percentage above the ECB rate – around the end of 2008. The banks used this step to deny those moving off fixed-rate loans the option of returning to rock-bottom tracker rates. In other cases, borrowers were allowed to break out of fixed-rate contracts but were not told this would mean losing their trackers. Read more here.

“In my office there’s a colleague, who for 20 years has acted as the county coroner. He presided over inquests where young families had come because the bread winner of the house had taken their life and time and time again, those families were going into an inquest and hearing how their loved one died, because that loved one could see no future.

“Not one banker ever turned up to any of those inquests. They were reported as people taking their lives for private reasons, but the reality is, and it’s going to come out, people have consulted with me about this, how do you replace a loved one?

Mr O’Dwyer said his advice to everybody, is to get their file from their bank. “You must satisfy yourself, not your lawyer or accountant, that the relationship that you understand is based on the trust that you have with your bank and is a solid relationship,” he added.

“You need to know that the bank has not conducted another mischief act that you’re not aware of, which may come out. Those people who do that immediately find themselves emboldened, empowered, they’re educated because then they can ask proper questions about what happened on a specific date, or a specific rate or why this was done.

“The degree of mobilisation, the degree of anger that there is out there now is unprecedented. I don’t think there are hiding places for bank officials, who themselves know what is going on. How long are they going to continue this corporate line that everything is in order when there comes scandal after scandal and the tracker mortgage will not be the last issue?”

Mr O’Dwyer said the reason class actions were not possible in in Ireland is because “nobody in Kildare Street has had the gumption to take on the issue.”

Responding to a comment last week by Minister for Finance Paschal Donohoe that class actions might be introduced in Ireland, Mr O’Dwyer explained that at present in Ireland class actions are precluded by law. “There’s no facility in Irish law to be able to group together where you have one wrong doer, where you have a lot of victims, and where those victims are seeking redress.”

“People are even more vulnerable when they’re taking on their own bank, this is where people need to take control of their own banking affairs. If you take on your bank the chances are you owe that bank money, a lot of money, the chances are they have security on your home, so to muster up the courage to be able to say, fine I’m taking all these risks on board, but I’m going to go out and get my dues - it takes a special type of person to do it.

“The fact that class actions don’t exist now means that that person has to have extra qualities to take on the banks.”

1 Guinness brings out a non-alcoholic version of the black stuff
2 Goldman Sachs in talks to take over Blanchardstown shopping centre
3 Journey’s end? Car rental companies fight for survival
4 ‘Last-chance saloon’ Brexit talks will yield deal, Phil Hogan claims
5 Cliff Taylor: Jobs in the firing line as the country moves to Level 5
6 ‘French people are pretty relaxed. They don’t pander to scaremongering or hysteria’
7 Redundant reindeer, ‘jobs of tomorrow’ and the ExxonMobil call that ‘never happened’
8 How Tony Buzan used mind maps to doodle his way to millions
9 Vendors adopting ‘wait-and-see’ approach in sub-€20m market
10 Ireland in recession as economy contracts by more than 6%
Real news has value SUBSCRIBE
Save money on international transfers