MSL and Malta, business leaders on Brexit, and take home pay under FG 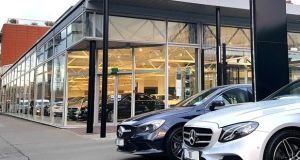 The wealthy O’Flaherty family who own the MSL motor group, the main distributor for Mercedes-Benz cars in the republic, have shifted ultimate control of their sprawling business empire offshore, company filings suggest. Mark Paul has the details.

Nearly 90 per cent of Irish business leaders believe the Government needs to “actively address improving relations with the UK” after three years of difficult Brexit negotiations, according to a survey by the Institute of Directors in Ireland. Eoin Burke-Kennedy reports.

Reintroducing a transition pension to bridge the gap to the State pension for those retiring at 65 threatens the sustainability of the whole system, Ireland’s actuaries have warned. Dominic Coyle has the details.

Amazon, Facebook, Airbnb and Stripe were among the big technology companies to file returns about their recent lobbying activities. Laura Slattery examines the filings.

A judge has ruled Ryanair must pay a portion of the legal costs of its former chief operations officer Peter Bellew, who had to defend the airline’s failed bid to block his move to rival EasyJet. Aodhan O’Faolain reports.

In our weekly personal finance feature, Joanne Hunt examines the impact of nine years of Fine Gael-led governments on the take-home pay for workers and pensioners.

In media and marketing, Laura Slattery looks at the many challenges facing public service broadcasters RTÉ and the BBC and discovers they are remarkably similar.

Will the next decade be a better one for value investors? Proinsias O’Mahoney has the answer.