Investors increasingly bullish but not yet euphoric, Bank of America survey finds 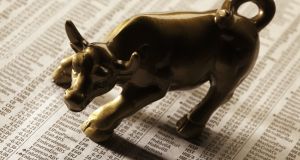 Excessively bullish sentiment is a contrarian indicator, so there are grounds for concern in the latest survey. Photograph: iStock

Investors are increasingly bullish but not yet euphoric, according to Bank of America’s (BofA) latest monthly fund manager survey. Excessively bullish sentiment is a contrarian indicator, so there are grounds for concern in the latest survey. The percentage of investors expecting improving global growth in the next 12 months is the highest level in almost two years.

However, there’s no euphoria just yet. Cash levels are low but needed to drop to 3.8 per cent to signal “unambiguous greed”. Global growth expectations are rising but short of “boom” levels. Similarly, equity allocations are rising but remain well shy of levels that have historically coincided with market tops.

Overall, BofA’s Bull and Bear Indicator stands at 6.9, below the 8.0 level that would generate a sell signal. The big short opportunity will come, says BofA’s Michael Hartnett, but investors should stay “irrationally bullish” on risk assets for now.

1 Eason acquires rival Dubray Books for undisclosed sum
2 Bank leaked my loan request to family who tried to rip me off
3 When the Chemistry no longer works – the closing of a leading Irish ad agency
4 Solar panels: Are they worth the investment?
5 Ryanair and Aer Lingus monitor impact of coronavirus on travel to Italy
6 What is at stake for Ireland in the new Brexit talks?
7 Can I see my father’s previous wills?
8 Digicel’s earnings rise as it looks towards refinancing $1.3bn of bonds
9 Battery bottleneck stalls electric car sales
10 Kingspan and Greencore executives sell €11m in shares
Real news has value SUBSCRIBE
Save money on international transfers