RTÉ and Irish Times among most trusted; BBC more highly regarded here than in UK 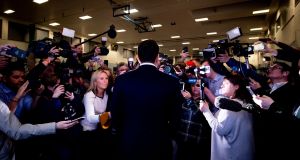 The media gathers to hear from Taoiseach Leo Varadkar at the Dublin West election count in February. Photograph: Tom Honan

Irish people’s trust in the news has remained stable over the past year, bucking international trends and contrasting sharply with a collapse in trust among UK news consumers, the latest Reuters Digital News Report shows.

A survey of 2,000 people in the Republic found that 48 per cent agreed they could trust most news most of the time, the same percentage as in 2019.

However, UK trust levels in the news have fallen from 40 per cent to 28 per cent, with the phenomenon attributed to the legacy of Brexit and to a “toxic” general election campaign that saw both sides criticise the media.

In the US, trust levels have dropped three points to 29 per cent, with the trend partly attributed to the “anti-media rhetoric”of US president Donald Trump.

In the UK trust levels have plunged most among news users who lean to the political left, while in the US, it is right-leaning people who are much more likely to mistrust the news.

“Divided societies seem to trust the media less, not necessarily because the journalism is worse but because people are generally dissatisfied with institutions in their countries and perhaps because news outlets carry more views that people disagree with,” the report concludes.

The less politically polarised Republic had the joint-seventh-highest trust rate of the 40 countries studied. The international average was 38 per cent, down four percentage points since 2019.

The BBC now enjoys higher levels of trust in the Republic than it does in the UK, the study by the Reuters Institute for the Study of Journalism and the University of Oxford suggests.

Some 75 per cent of Irish people said they trusted the UK public service broadcaster, but only 64 per cent of people in the UK did.

The Irish element of the research was funded by the Broadcasting Authority of Ireland and carried out by DCU’s Institute for Future Media and Journalism.

While 18-24-year-olds were the least trusting of both news in general and news on social media, they were also among the least concerned about misleading information online, which Niamh Kirk, a co-author of the Irish study, said might “point to a certain degree of confidence and savvy”.

Transparency and openness were important for building trust with this group, she said.

“While it is important that news media be authoritative, they must also recognise their fallibility. The traditional, formal, authoritative approach may not be relatable for younger audiences.”