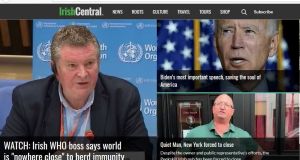 Studio Media is the publisher of Irish Central.

Studio Media Group, which owns the Irish Central website and also has a stake in the publisher of the Business Post, has acquired Canadian technology start-up Darwin CX for 7.46 million Canadian dollars (€4.77 million).

Toronto-based Darwin CX is a developer of cloud-based applications for publishers and membership-based organisations that aim to help boost customer acquisition and retention.

Studio Media is acquiring the company from ZoomerMedia with the company paying C$5.4 million in cash and also providing a C$1.28 million promissory note.

Darwin will continue its relationship with ZoomerMedia following the sale, with the start-up still managing subscriptions for its former parent and remaining in its offices in Toronto.

The deal comes on the back of the $1 million acquisition of Florida-based fulfilment provider Palm Coast Data last year. Studio Media co-chairman Liam Lynch said Darwin’s solutions would complement the technology and tools it has gained as a result of buying Palm in April 2019.

“This will give our clients modern tools to develop new revenue streams and find innovative ways to grow their businesses,” he said.

Studio Media, which also publishes Ireland of the Welcomes and British Heritage Travel, sold a portfolio of Irish magazine titles it owned to the publisher of the Business Post newspaper in an all-share transaction late last year.

The portfolio, which included Irish Tatler, Food & Wine and Auto Ireland, had been acquired by the US-Irish company from Norah Casey’s Harmonia in 2017.

Mr Lynch joined the board of Business Post Media Group as part of the deal with the company also securing a minority stake in the company.

Studio Media appointed Katie Molony and Ciaran Casey as co-chief executives early last year. Ms Molony was previously chief executive of Maximum Media/Joe and before that marketing manager of The Irish Times. Mr Casey, meanwhile, joined the group following the sale of the Harmonia titles to the company and served as chief executive of its Irish operations until the promotion.