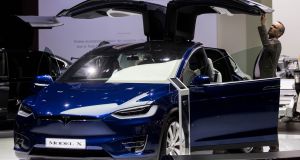 The firm, 365 Data Centers, has been bought by Piercy’s Chirisa Investments in partnership with private equity firm Lumerity Capital and another investor, Longboat Advisors.

The Independent also reports that An Post will fight to retain the contract to collect the TV licence fee, which is expected to be put out to tender after legislative changes.

At least two commercial operators are also likely to vie for the contract, with services company Capita and Abtran in Cork understood to be interested in tendering for the contract.

Galway is to get a Covent Garden-style covered marketplace with a development planned by Michael Maye, a low-key telecoms entrepreneur, according to the Sunday Business Post.

The €60 million project is being promoted by Davy Private Finance and involves a sizeable build in one of the oldest parts of the city. It is hoped that the project will be finished in time for the 2020 City of Culture celebrations.

Paul Dunn, head of sales with Merrion Fleet, said his firm hoped to help companies lease electric cars from Tesla from just under €1,000 a month upwards.

The Sunday Times reports that the owners of Home Instead Senior Care, Michael Kearney and Ed Murphy, have sold more than half the business to outside investors including retired stockbroker Tony Gary.

Under the deal, the Home Instead affiliate in Switzerland has acquired close to 60 per cent of the master franchises for Ireland form Mr Kearney and Mr Murphy for an undisclosed sum.

Home Instead provides elderly care services and has 4,000 clients on its books.

The Times also reports that ATA Group, an engineering tools business based in Cavan, has raised a €12.5m investment from BDO Development Capital fund and private investors.

The BDO fund led the investment in ATA, putting up €7.5 million of the total.

The Sunday Telegraph reports that a group of City of London financiers are planning to revive a radical plan to hand the UK government’s stake in Royal Bank of Scotland to the public.

Portman Capital Partners is preparing to approach UK Financial Investments, which manages the British taxpayer’s 71 per cent stake which could allow the divestment of the stake in one go. The scheme involves the British government giving taxpayers shares in the RBS for free, they would be allowed to sell the shares when a set floor price had been reached. For example, if the floor was 300p a share and the investor sold at 325p, the investor would pocket the difference and the floor price of 300p would go back to the state.