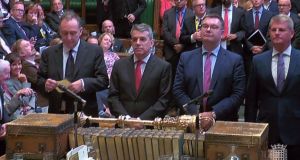 A host of Brexit-exposed stocks recovered in Dublin as the House of Commons moved to stop Boris Johnson taking the UK out of the EU without a deal in just over seven weeks’ time.

House builder Cairn Homes, which investors fear could be vulnerable should a hard Brexit hit the Irish economy, added 2.97 per cent to end the day at €1.04. The company is due to report interim results next week.

Challenged lender Permanent TSB added 1.96 per cent to €1.04, benefiting from the general recovery prompted by Mr Johnson’s defeat. “Anything Brexit exposed got a lift today,” one dealer said.

Hotel group Dalata shed 1.06 per cent to €4.65, as some investors cashed in on the strong gains that the stock made after the company released a stellar set of interim results earlier this week.

Bicycle and car parts retail chain Halfords tumbled to a 12-month low after warning that profits for its current financial year would fall short of the £58 million that investors expected.

In a statement that analysts already predicted would be downbeat, Halfords said profits for the financial year ending March 29th would be £50 million-£55 million.

Its shares tumbled to a 12-month low of 162p following the news, before recovering slightly and closing 1.74 per cent off at 169.3p.

Luxury brand Burberry added 1.7 per cent to 2,224p, one of a number of Asia-exposed stocks that bounced back after Hong Kong withdrew an extradition Bill that triggered months of protests.

Similarly, lender Prudential, which is active in the same market, advanced 3.6 per cent to 1,397p, while Standard Chartered climbed 2.98 per cent to 643.4p.

Digital services company Kainos tumbled 11.7 per cent to 437p, leaving it languishing at the bottom of the Ftse 250 after it flagged caution in public-sector spending in the UK against the backdrop of Brexit.

Dunelm handed back its earlier gains and dropped more than 9 per cent to 799.5p as investors took note of the homeware retailer’s cautious outlook over upbeat results.

Among smaller stocks, specialist pension provider Just Group slumped 8.2 per cent after half-year results, while retailer Quix Plc skidded 8.4 per cent after it said the number of shoppers coming into its fast-fashion stores had fallen this year.

Meanwhile, Marks & Spencer, which has dipped this week ahead of its possible relegation from the Ftse 100, added 3.4 per cent to 193.1p.

Investors cheered an unlikely coalition in Italy that united rival political parties the 5-Star Movement and the Democratic Party, heading off the risk of an early election and prolonged political instability.

Italy’s Ftse MIB index rallied about 1.6 per cent, touching a more than one-month high, while the banking index jumped 1.75 per cent.

Wall Street’s main indexes rose on Wednesday as fears of a global economic slowdown were calmed by robust economic data from China, while easing tensions in Hong Kong added to an upbeat mood.

Tyson Foods shares fell 6.12 per cent to the bottom of the S&P 500 after the United States’ biggest meat processor cut its 2019 earnings forecast.

Coffee shop chain Starbucks dropped 1.02 per cent after the company said it expected 2020 adjusted profit growth to be lower than 2019 as it factored in the impact of a one-time tax benefit that has inflated its bottom line this year.