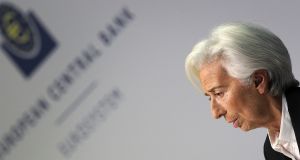 Christine Lagarde, President of the European Central Bank. Governors of the ECB are expected to prepare the ground for new stimulus, armed with a new set of forecasts on the bloc’s sluggish recovery and with the coronavirus pandemic resurging. Photograph: Daniel Roland/AFP via Getty Images

European stocks fluctuated as investors waited for the outcome of the European Central Bank meeting that could signal more stimulus given weak inflation and a firm euro.

While the ECB is widely expected to keep policy steady, investors will be closely watching comments from President Christine Lagarde for any hints on whether the stronger euro is becoming a problem for the region. Analysts have speculated that Ms Lagarde and her colleagues could start laying the groundwork for an intervention that would prevent the euro’s strength from slowing an economic recovery.

“The persistent dollar weakness since March has started making some governments and central banks uncomfortable,” said Athanasios Vamvakidis, head of Bank of America’s Group-of-10 currency strategy. “We expect the ECB to push against euro strength today. It is still early to talk about risks of a currency war, but I would expect more push against further dollar weakness.”

US equity futures were little changed, suggesting the S&P 500 could take a pause after rallying the most since June. In Europe, the Ftse 100 Index led losses on fears that Brexit talks are falling apart. The Stoxx Europe 600 Index climbed 0.1 per cent.

After a volatile few days, technology stocks are still front and centre on the minds of investors. Yesterday, the S&P 500 rose the most since June overnight and the Nasdaq rebounded following an 11 per cent rout that took the gauge down to its 50-day moving average, a closely-watched technical level.

Calm prevailed ahead of the ECB policy decision at 1145 GMT and news conference at 1230 GMT.

Having acted aggressively in recent months to protect the economy from the coronavirus shock, the ECB is not expected to take any major policy action.

But inflation has turned negative and a strong euro, which adds to downward pressure on prices, has raised concern about long-term price growth that could force the ECB to act again soon.

“I don’t think the move in the euro has been sufficiently big to be a real concern but it’s just against the backdrop of everything else that is happening that means it’s not particularly welcome news,” said Anatoli Annenkov, senior European economist at Societe Generale.

He expects the ECB’s emergency bond buying programme to be extended and expanded by a further €500 billion in October or December.

The ECB’s growth and inflation projections to be published later in the day will only show slight changes compared with the bank’s June forecasts, Bloomberg reported on Wednesday.

Brian Coulton, chief economist at Fitch Ratings said that aggressive ECB policy action had helped boost inflation expectations and that deflation in the single-currency bloc should be avoided.

“While we don’t think they (the ECB) will hit their target, we do think they will manage to avoid outright deflation,” he told an online conference on Wednesday. – Bloomberg, Reuters

1 Ryanair and Eir the worst for customer service during Covid crisis
2 What to consider if older person or loved one needs care at home
3 ‘Essential’ retailers risk a firestorm if they exploit the closure of the ‘non-essential’
4 Fair deal? Family at odds with hospital and each other not so sure
5 PlanNet21 eyes further acquisitions after buying rival eCom
6 Glenveagh attracts growing hedge-fund interest
7 Level 5 restrictions risk pushing economy into double-dip recession
8 INM inspectors write to former directors in ‘inside information’ inquiry
9 Tinnitus group Neuromod raises €10.5m for expansion
10 Streaming services set for Christmas battle after drama-filled year
Real news has value SUBSCRIBE