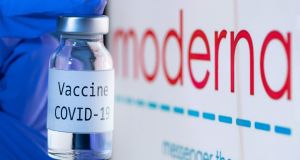 European shares made a positive start to December, as Covid-19 vaccine optimism strengthened the case for an economic recovery.

Upbeat Chinese factory data also fuelled hopes for a global economic recovery from the pandemic, with data showing China’s factory activity accelerated at the fastest pace in a decade in November.

Uncertainties around a Brexit trade deal, however, kept gains in check.

The Iseq index closed 0.6 per cent higher as gains tapered over the course of the afternoon. Building materials group CRH added 2 per cent to €33.49 while Ryanair, another index heavyweight, advanced 3.2 per cent to finish at €15.78.

It was a good session for the banks, with AIB putting on 5 per cent to close at €1.58 and Bank of Ireland soaring 8.8 per cent to €2.87 on a strong day for financial stocks across Europe.

Swiss-Irish food group Aryzta rose 0.8 per cent to just below 62 cent after it released quarterly earnings that were broadly in line with expectations, with a 20 per cent drop in revenue amid an ongoing hit from Covid-19.

Smurfit Kappa was another climber, with the packaging giant rising 2.9 per cent to €36.68. However, Paddy Power owner Flutter Entertainment slipped 2.4 per cent to €151.80, while insulation company Kingspan declined 3.1 per cent to €70.90.

Britain’s FTSE 100 and mid-cap FTSE 250 had their best session in three weeks on Tuesday as UK manufacturing showed its fastest growth in output in almost three years, heightening the impact on market sentiment brought by China’s acceleration in factory activity.

The Chinese data drove a surge in Asia-focused banks, which gained 5.6 per cent, while the blue-chip FTSE 100 rose 1.9 per cent, extending its biggest monthly gain in more than three decades, and the FTSE 250 added 2.6 per cent.

British house prices rose by the most in nearly six years in November, data showed, lifting the FTSE homebuilders index by 1.9 per cent.

London-listed Irish food group Greencore, one of the UK’s biggest producers of Scotch eggs, jumped 5.9 per cent after Cabinet minister Michael Gove said pubs could serve them as a “substantial meal” to open in areas under the UK’s Tier 2 Covid-19 restrictions.

Marks & Spencer swelled 5.6 per cent after it was confirmed that Debenhams, a key rival, would be liquidated, while Arcadia Group fell into administration. Fellow retailer Next added almost 3 per cent, while JD Sports, which pulled back from a potential rescue of Debenhams on Monday, added 4 per cent.

After a day’s dip, when investors took some profits at the end of a spectacular month, the pan-European Stoxx 600 index was back in the black on Tuesday, rising 0.65 per cent. The index ended November with gains of nearly 14 per cent.

French stocks advanced 1.14 per cent after president Emmanuel Macron outlined a plan for a widespread Covid-19 vaccination campaign in France between April and June. The German Dax added 0.7 per cent.

US stocks joined their global counterparts in starting December on a bullish note with a rebound from Monday’s retreat.

Tesla added more than 2 per cent in early trading after news that it will be added to the S&P 500 index on December 21st, a move that will ripple through the entire market as money managers adjust their portfolios to make room for shares of the $538 billion company.

Moderna jumped as much as 17 per cent shortly after the market opened Tuesday before nose-diving 10 per cent in the afternoon session. The stock had surged 55 per cent in the prior three trading days.