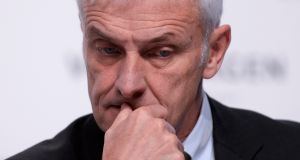 Volkswagen Group Chief Executive Matthias Müller: Although the current situation is serious, this company will not be broken by it.”

The chairman of the car giant’s supervisory board, Dieter Pötsch told a news conference Thursday morning: “We’re faced with three key aspects here: Individual misconduct of people in one part of the company, weaknesses in some of processes that we have and partial tolerance when it came to breaching rules. That is the factor that’s the most difficult one for us to realise.”

In an update on investigations into an array of emissions scandal to hit the car giant, he said emissions tests will in future be verified by internal and external third parties and “we are also introducing universal real life tests in on-road driving”.

Mr Pötsch said that what has been learned so far from the investigations is that the launch of a major campaign to push diesel sales in the US was the major catalyst to the scandal. Engine developers could not find a way to meet permissible means to comply with tough US emissions regulations, at least in the timeframe and budgets available. That led to the installation of the cheat software that could determine whether a vehicle is on the road or a test bench.

Later, when ways were developed to legally meet emissions standards, these were not used as they were regarded as being to the detriment of the customers.

“In hindsight it all sounds a little banal but perhaps why we find the whole thing so incredible. All this goes against values of Volkswagen and our 600,000 employees.”

The 11 million cars fitted with NOx cheat software – 8 million of which are in Europe – are to be recalled starting early next year. In Ireland 115,972 cars will be recalled. These are fitted with a diesel engine - known internally as the EA189 engine - sold across a wide range of models in the VW, Audi, Skoda and Seat brands. The diesel engines affected are sold in 1.2-litre, 1.6-litre and 2-litre formats.

Mr Müller was repeatedly asked about the level of compensation the group was prepared to make to customers who suffer a loss due to the fall in value of their vehicles on the back of the emissions scandals. However, he declined to go into detail on the levels of compensation that could be offered.

Europe’s biggest carmaker launched internal and external investigations in September after admitting to cheating diesel emissions tests in the US.

He said that so far specialists involved in the investigations had sorted through 102 terabytes of data - equivalent to 50 million books - and carried out 87 extensive interviews. They have also secured 1,500 storage devices - laptops, smartphones and the like - from almost 400 employees.

Mr Pötsch said: “Around 2,000 group employees have been informed in writing they must not lose any data as it may be required for the investigation, in what is called a ‘litigation hold’.” He said this did not mean these people are not under suspicion but on their computers, on USB sticks there may be information that offers a better understanding of the context for events. The firm “still believes only small number of employees were actively involved” in the cheat software deception.

He said Volkswagen would not name any individuals involved as yet.

Yesterday the firm confirmed that a separate investigation has cleared the carmaker of claims it systematically cheated on carbon dioxide (CO2) figures.

This more recent inquiry was launched in November after at whistle-blower informed Mr Müller of suspicions of cheating on CO2 ratings. The company quickly announced an investigation and issued a statement estimating that up to 800,000 cars sold had the wrong CO2 figures. This would have had significant tax implications for many motorists as CO2 is the basis for motor tax regimes in many countries, including Ireland. However, the investigation has found no evidence of systematic cheating on CO2 and where there are discrepancies these are in in the order of one or two grammes.

It has also found that only nine VW branded models currently on sale are wrongly calculated. The total number affected is now estimated to be in the region of 36,000.

With only six of the affected model variants sold in Ireland - and most in very low volumes - the initial 9,000 Irish cars estimated to be wrongly rated for CO2 that figure is expected to drop significantly and it’s still unclear if any of the changes will have tax implications.

Volkswagen faces at least €6.7 billion in diesel recall costs, not including likely regulatory fines and potential damages from hundreds of lawsuits. The carmaker is also experiencing a backlash from consumers, particularly in the US, amid the sluggish progress to recall the vehicles.

The NOx emissions scandal has already forced out its long-time chief executive and wiped 13 per cent - or €10 billion - off its market value. “We will not allow the crisis to paralyse us,” Chief Executive Matthias Muller said. “Although the current situation is serious, this company will not be broken by it.” In an earlier TV interview Mr Müller said he’s committed to keeping the company’s 12 brands, suggesting the carmaker has the financial means to recover from the crisis.

Shares in Volkswagen were 2.5 per cent higher at €135 as the press conference progressed.