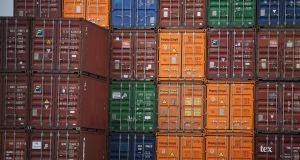 The cost of shipping a 40-foot container from Asia to northern Europe has increased from about $2,000 (€1,648) in November to more than $9,000. Photograph: Nick Bradshaw/The Irish Times

The cost of shipping goods from China to Europe has more than tripled in the past eight weeks, hitting record highs as a shortage of empty containers stemming from the pandemic disrupts global trade.

The cost of shipping a 40-foot container from Asia to northern Europe has increased from about $2,000 (€1,648) in November to more than $9,000, according to shippers and importers.

Lars Jensen at?consultancy SeaIntelligence said: “It’s a bottleneck problem... These rates are being driven by customers fighting over a limited resource - containers.”

Thousands of empty containers were left stranded in Europe and the US in the first half of 2020 when shipping lines cancelled hundreds of trips as coronavirus lockdowns caused a sudden slowdown in global trade. When western demand for Asian-made goods rebounded in the second half of the year, competition among shippers for available containers sent freight rates soaring.

John Butler, president of the World Shipping Council, said: “We’ve gone from a tremendous drop-off to getting whipsawed into historically high cargo volumes and there’s now more than terminals can efficiently handle.”

Congestion at ports is contributing to higher prices, with shipping lines charging extra fees to compensate for longer waiting times, he added.

Since November the cost of shipping to Europe has been exacerbated by the diversion of containers to trans-Pacific routes. By contrast, the cost of shipping from China to the US has plateaued since October, when the Chinese government asked shipping companies to cap their rates.

Philip Edge, chief executive of UK freight forwarder Edge Worldwide, said some businesses were being charged $12,000 per container, up from about $2,000 in October.

The UK’s Association of Manufacturers of Domestic Appliances said in a statement that its members reported increases in shipping costs of up to 300 per cent since the start of 2020, including cases “where the increase in cost of shipping is greater than the retained profit from the goods... so these costs will have to be passed on to end users”.

“Producers do not expect to be able to absorb these huge increases in freight costs,” it said.

The disruption and delays are beginning to affect global supply chains, according to economists. “Signs of strains are building up,” said Neil Shearing, chief economist at Capital Economics, who warned that the pressure was expected to “intensify before it eases”.

A recent survey by IHS Markit found that, in December, euro zone manufacturing suppliers’ delivery times reached the worst levels since the height of pandemic-related lockdowns last April, and delays in transportation and general goods shortages at suppliers “were widely reported”.

Surveyed companies said they were running down their stocks of raw materials and semi-manufactured goods, resulting in falling inventories, and reported a rapid increase in input prices.

Bert Colijn, senior economist at ING, said “supply shortages and higher freight rates could dampen trade growth a bit” and contribute to “temporarily higher inflation pressures over the course of the year”.

Shipping lines hope the slowdown in Asian manufacturing that typically accompanies the lunar new year in February will allow carriers to tackle the growing backlog of orders and lead to at least a temporary cooling of prices.

But Peter Sand, an economist at international shipping association Bimco, said container shortages were likely to continue long into 2021 despite carriers recently placing new orders for containers, which he described as “too little, too late”.

Mr Jensen said that although prices may drop a little, “there is still a huge amount of cargo waiting to be shipped”.

Pressure on maritime supply chains should ease “when people have more options to spend on services” because coronavirus-related restrictions have been lifted, Mr Butler said - but “when that happens is anyone’s guess”.

8 Covid-19: Little room for error if tourism is to reopen for staycations