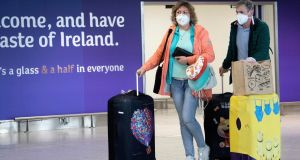 Making melt-blown fabrics – the unique material used in surgical masks – has been like printing money for Yu Xiaoning since the outbreak of coronavirus in January.

The public health crisis that has spread from China to Europe and the US has led to a global shortage of surgical masks as governments seek to protect health workers, and people everywhere try to prevent contagion.

It has also created a surge in demand for the polymer-based fabrics used in the protective coverings, a market over which Mr Yu’s company Dawn Polymer is fighting to retain control.

With an estimated market share of 40 per cent for the speciality fabrics used in masks in China, shares in Shenzhen-listed Dawn Polymer soared by 417 per cent in the six weeks following January 20th, when the Chinese nation was alerted to the spread of the virus.

The value of Mr Yu and his wife Han Limei’s holdings in the company they control surged by more than 13.5 billion yuan (€1.7 billion) by March 9th to about 16.8 billion yuan (€2.1 billion), based on the most recent disclosures.

The share price has pulled back since then as the outbreak has eased in China, but the couple have become one of the world’s biggest beneficiaries of the unprecedented demand for masks.

“Downstream demand is highly prosperous, and melt-blown materials are expected to significantly increase [Dawn’s] profitability in the first half of the year,” said Huaxin Securities analyst Yang Wei in a recent report.

Mr Yu has been in the plastics business since the 1990s and was general manager of a rubber and plastics group in the small city of Longkou, Shandong in eastern China.

He launched Dawn Polymer in 2002 and began perfecting melt-blown fabric production during the outbreak of severe acute respiratory syndrome (Sars) in 2003.

“Because of Sars that year, we changed [the fabric] from a series of varieties to a key product to focus on,” Mr Yu told Chinese Entrepreneurs magazine in a recent interview. “After 17 years of accumulation, we have become a leading domestic manufacturer in terms of technology and production output.”

He has since become a celebrated entrepreneur in Shandong. In 2019, wealth tracker Hurun Report estimated Mr Yu’s personal wealth at 3.6 billion yuan (€4.5 billion).

With the value of masks climbing around the world, Dawn is facing robust new competition in the world of melt-blown materials.

Hordes of companies have pushed into the mask-making market, often converting factory floors built for other purposes into mask-assembly units. Some large groups, including Chinese oil major Sinopec, have announced they will begin production of the materials.

But analysts warned that the fight for dominance in the market for what is now one of the world’s most highly sought-after commodities – along with toilet paper – will depend on the ability to produce the specially designed polymer fabrics inserted into the masks.

Melt-blown fabrics are relatively easy to produce, according to Mr Xue at Hengtai Securities, but the level of quality required for surgical-mask inserts makes breaking into the market for masks much tougher. The key is the ability to create high-quality polypropylene materials that flow at a high rate at certain temperatures.

“This is why I am also a little worried,” Mr Yu told Chinese Entrepreneurs. “If everyone blindly tries to produce [the fabrics], it will affect the product quality.”