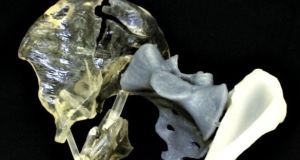 The global 3D printing medical devices market is set to grow by more than 20% in the next five years.

Belfast-based medical technology company Axial3D has raised £2.4 million (€2.67 million) in funding as it looks to expand into new markets.

Founded by Daniel Crawford in 2014, the company prints precise anatomical models using data generated from CT, MRI and PET scans for healthcare professionals that help them prepare for surgical procedures.

While the company is already working with a number of renowned healthcare providers and surgeons, the new investment will be used to support the creation of eight additional jobs, as well as for further investment in its technology and for expansion in several new markets, including the US.

London-based Imprimatur Capital Fund Management led the Series A round with Techstart Ventures also backing the start-up via its TechStartNI fund. Other supporters of the company include Clarendon Fund Management and Ulster University’s investment subsidiary, Innovation Ulster.

“The closure of this investment round marks an important milestone for our company. It will accelerate our growth within new markets and enable us to bring our 3D printing solution to more healthcare organisations, helping them to drive down costs, improve compliance and, ultimately, enhance patient care,” said Mr Crawford, the company’s chief executive.

Axial3D, which previously raised £530,000 in funding, was named “emerging medtech company of the year” at the Irish Medtech Excellence Awards in 2018.

The global 3D printing medical devices market is set to grow by more than 23 per cent in the next five years, mainly as a result of the increasing adoption of 3D printing technology within the medical sector.