Underground passageway was used only to smuggle goods into Gaza, Hamas claims 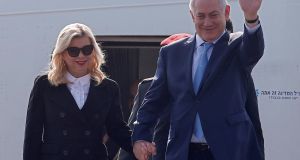 Israeli prime minister Binyamin Netanyahu and his wife Sara: “We are systematically eliminating the tunnel infrastructure of Hamas and Islamic Jihad; they should not try us.” Photograph: Adnan Abidi

Israel says it has destroyed a cross-border tunnel dug by Hamas into Israel, which continued to Egypt, claiming it could have been used to smuggle militants and weapons from Egypt to Gaza and to stage attacks against Israel.

Speaking during a trip to India, prime minister Binyamin Netanyahu praised the operation.

“We are systematically eliminating the tunnel infrastructure of Hamas and Islamic Jihad; they should not try us.”

The Israel Defence Forces(IDF) spokesperson Brig Gen Ronen Manelis said the tunnel – the third destroyed by Israel in recent months – originated in the southern Gaza Strip city of Rafah, about 900m (3,000ft) from the border fence, and stretched through into Israeli territory running under the Kerem Shalom goods crossing and the gas and diesel pipeline that supply Gaza .

“Destroying this tunnel was a necessary defensive action, as it ran 180m into Israel. This was a significant tunnel,” he said.

The army credited the discovery and destruction of the tunnel to a combination of “cutting-edge” technology and intelligence.

Israel rejected the claim by Hamas, which controls Gaza, that the underground passageway was only used to smuggle goods into the coastal enclave.

During the second Gaza war in 2014, Israel discovered 32 tunnels, including 14 that extended into Israel.

Following the 30-day conflict, the Israeli military prioritised thwarting the subterranean threat from Gaza. New, secret technology was developed to locate tunnels and Israel is currently engaged in building a massive underground barrier along the entire length of the Gaza Strip border in one of the country’s biggest-ever infrastructure projects, expected to be completed next year.

Hamas and Islamic Jihad have made no secret of the fact that the ongoing construction of new attack tunnels remains one of their top priorities, with massive financial and manpower resources channelled to such projects.

The discovery of the Hamas tunnel reaching into Egyptian territory is likely to increase tension between Hamas and Cairo, which brokered the reconciliation agreement last year between the Islamic group and the Fatah-controlled Palestinian Authority (PA), which controls the West Bank. The Ramallah-based authority was due to gradually reassert its control of Gaza under the terms of the accord.

Egypt has been working to cut the links between Hamas and other groups in Gaza with Islamic State militants in the Sinai who have carried out dozens of deadly attacks against Egyptian forces.

In a separate incident, a car bomb explosion in the southern Lebanese city of Sidon lightly wounded a senior member of Hamas, which blamed Israel for the assassination attempt. Mohammed Hamdan suffered a leg injury on Sunday after a bomb planted in his car detonated.