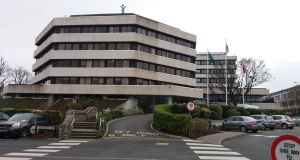 Blackrock Clinic: battle over control of the clinic has taken yet another turn

The ongoing battle over control of the Blackrock Clinic has taken yet another turn in its labyrinthine progress through the courts.

The “validity and authenticity” of a document transferring ownership of a key part of the Goodman business empire from Larry Goodman and his wife, Catherine, to a Liechtenstein trust has now become an issue.

The Goodman group is one of Ireland’s largest family-owned businesses. It includes one of Europe’s largest food processing companies, ABP Foods, which plays a key role in Ireland’s agricultural sector.

The group also has a valuable property portfolio which includes the Miesian Centre on Baggot Street, part of which is rented by the State for about €10 million a year, and the Setanta Centre on Nassau Street, for which the group has a €100 million redevelopment plan.

The group also has an interest in the Irish healthcare sector, with shareholdings in the Blackrock Clinic, the Galway Clinic, and the Hermitage Clinic, which is in Lucan, Dublin.

All of these assets are owned by way of a complex web of Irish and international companies. Ultimate ownership apparently rests with one or more entities in Liechtenstein.

In an ongoing and bitter High Court row over control of Blackrock Clinic, Goodman is resisting an attempt by another Blackrock shareholder, Dr Joseph Sheehan, to pry into details of the Liechtenstein ownership structure and its beneficiaries.

In a ruling earlier this week, Mr Justice Michael Quinn initially decided that witnesses from Liechtenstein could give evidence about Goodman’s little known trust arrangements. However, he then agreed the hearing should not go ahead when lawyers acting for the Goodman side said they wanted to appeal that decision to the Court of Appeal.

This means the evidence is unlikely to be heard before 2020 at the earliest, if ever.

On the opening day of the proceedings on June 19th, John O’Donnell SC, for Sheehan, outlined to the court what he said were changes in the control and ownership of an Irish company called Breccia, since it had been used by Goodman to buy shares in the Blackrock Clinic in 1996.

As part of a shareholders’ agreement signed at the time, proposed changes in control had to be notified to the other shareholders so they might have the option of buying those shares rather than their going to a new party.

O’Donnell said that, in 2006, Breccia was controlled by the Goodmans, by way of an Irish company called Arlesse Ltd. Arlesse is a significant company in the overall Goodman corporate structure.

But the lawyer said that, since 2006, control of Arlesse had changed and now resides with a foundation in Liechtenstein called Rabena.

One of the changes along the way occurred in 2009, when the Goodmans transferred their shares in Arlesse to a company in Malta called Galway, (which subsequently changed its name to Aburg). At that time, O’Donnell said, a trust in Liechtenstein called the Portlon Trust, became the controlling party. It had an indirect 67 per cent shareholding in Aburg.

Another change occurred in 2013, O’Donnell said. The evidence for this was a filing to the Jersey Financial Services Commission for a company called KH Holdings, which showed its shares going from Portlon to a company called Milestown Assets. The document was signed by former KPMG partner, Sean Mooney, who now works for Goodman.

O’Donnell said his side contended that the consequence of this was that Breccia came 100 per cent under the control of the Rabena Foundation.

Brian O’Moore SC, for Breccia, disputed O’Donnell’s claims. He said the Goodmans always held their shares in Arlesse on trust, for Portlon. He also said that the shares in KH Holdings, held by Portlon, were never transferred to Milestown (and thereby to Rabena).

O’Donnell said the Breccia position that the Goodmans always held the Arlesse shares in trust, was dependent on the court’s “acceptance of the validity and authenticity of two declarations of trust ... which we are told were signed by Mr and Mrs Goodman respectively on March 8th, 1995”.

He said he had put the defendants on full proof as to the authenticity and validity of the documents. The documents signed by Larry and Catherine Goodman were not witnessed, and no documentation “verifying or establishing the genesis of their creation has been adduced”.

He told the court that Breccia did not propose to call either of the Goodmans to prove the documents. “The authors are happily alive and well and perfectly in a position to come in and give evidence, but they won’t,” O’Donnell said.

He said that the audited statements for Arlesse, signed by the Goodmans, “expressly contradict the assertion, now made, that these shares were held in trust or on behalf of Portlon”.

Audited financial statements signed by Mr and Mrs Goodman, as directors of Arlesse, stated, under the heading “controlling party”, that they held “a beneficial interest in 100 per cent of the share capital of the company”. There was no mention of the shares being held in trust.

O’Moore protested that O’Donnell was saying, effectively, that the declarations of trust signed by Mr and Mrs Goodmen were “fabricated”. (O’Donnell said he had never used that word.)

In response to O’Donnell’s comments on the first day of the trial, O’Moore protested strongly that Sheehan had departed radically from the pleadings that had originally been made and which his, O’Moore’s, side had come to court to defend.

He also strongly complained that it was being suggested, for the first time, that documents signed by the Goodmans in 1995 “effectively are fabrications”. It was a very serious allegation and they should have had notice of it. It was his intention to call Mooney to give evidence about the declarations of trust being brought to the Liechtenstein solicitors, Marxer.

O’Moore said that Sheehan had, at one stage, written to the Revenue Commissioners suggesting they follow the case that was before the court, and that news of this had ended up in the Sunday Business Post. In the circumstances, it was understandable that the Goodman side did not want to share confidential information about the Liechtenstein structures with the plaintiff.

O’Donnell said his side were saying the Rabena foundation was the 100 per cent owner of Breccia. Under Liechtenstein law, foundations were controlled by their beneficiaries, but Sheehan did not know who the beneficiaries of Rabena were.

When Mr Justice Quinn ruled last Tuesday that he was going to allow the evidence in relation to the Liechtenstein entities be heard, and later hear arguments as to the issues raised by O’Moore, the latter objected.

If the court was to later decide that the evidence about Rabena’s beneficiaries was not relevant to the case pleaded, he said, it would be too late, “the cat is out of the bag”.

O’Donnell said Goodman would have to disclose certain information in the course of the case.

“The fact that Mr Goodman and Mrs Goodman would prefer not to have details of their trust arrangements aired in open court is a matter for them, but it’s not a reason why this court should show them special favouritism,” O’Donnell said. “They are entitled to the same treatment, but not more, than any other citizen.”

People, he said, “give evidence and give private information about themselves day in, day out, in court”.

Mr Justice Quinn decided he could not proceed with hearing evidence in the circumstances. An appeal will now go to the Court of Appeal, and this will significantly delay this “module” of the complex and protracted Blackrock proceedings.

What happens next with other modules of the case has also to be considered. The judge put that matter back for mention to July 25th.