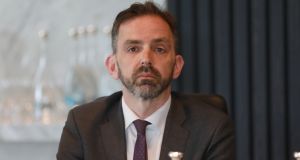 The Central Bank may impose gender-diversity targets on the State’s banks if they do not move decisively to boost the percentage of women at senior executive and management levels.

Ed Sibley, deputy governor at the regulator, said in an interview with the supervision newsletter of the European Central Bank, published on Wednesday, that Irish banks have only in the past two years begun to take steps to improve diversity at top levels. He said 94 per cent of top executive appointments in the Republic in the past six years were men, who typically had “similar backgrounds and experiences”.

“Low levels of diversity increase the risk of over-confidence in decision-making, a lack of internal challenge and excessive resistance to external challenges, and resistance to change,” Mr Sibley said, adding that the regulator is pressing bank boards to outline a “clear path” to improving diversity levels.

“However, if diversity does not improve at senior levels, the Central Bank will have to consider whether further specific requirements should be introduced,” he said.

A Central Bank assessment of diversity in the State’s banks – published last month alongside a behaviour and culture review that was prompted by the tracker-mortgage scandal – found that companies lacked ambition in this matter, particularly as “groupthink” was a contributing factor to the financial crisis.

The report found that men comprised 80 per cent of candidates that banks put forward between 2012 and 2016 for regulatory approval for senior roles, though that fell to 71 per cent in the past year. It also noted that the emerging diversity debate within companies was largely limited to a “one-dimensional” focus on gender.

“Banks must take ownership of their talent pipeline and put in place structures that provide the diversity of voices necessary for the constructive challenge that produces better outcomes,” Mr Sibley said. “It’s in their best interests to do so. That said, if they do not take the necessary action, the legislator and/or supervisor should.”

Mr Sibley said that while changes to regulatory rules, infrastructure and approach have “undoubtedly” made the European banking system more sound in the wake of the crisis, banks and authorities must be on the lookout for emerging risks.

“[T]he next crisis will undoubtedly be different,” Mr Sibley said. “So we need to be vigilant, be forward-looking and increasingly analytical to anticipate different risks and systemic issues, particularly in the rapid and far-reaching technological disruption that is taking place.”