Insurance industry must explain premium rises out of line with costs 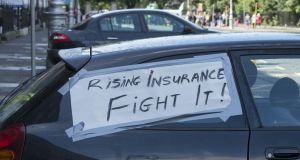 The Central Bank report shows that Irish insurers made an average profit of 9 per cent last year. Photograph: Dave Meehan

The Central Bank’s first report on motoring claims throws the spotlight on to the insurance industry to explain, credibly, why premiums rose 62 per cent between 2013 and 2018, while the cost of claims per policy rose by just 14 per cent.

The narrative spun by the insurance industry in recent years has been that claims costs are out of control, whether by fraud or exaggeration by claimants, and that this is the main reason why premiums have rocketed.

On average over the past 10 years, three-quarters of all the cash collected in premiums has been paid out in claims. So if there was merit to the insurance industry’s argument that claims have gone mad and that’s all there is to it, you would expect to see a fairly close correlation in the Central Bank’s data between the rate of increase in claims and the rate of increase in premiums.

Either claiming-gone-mad is the cause of the recent spike in motor insurance premiums, as the industry attests, or it is not

Yet if you illustrate the trajectory of the two on a graph, the arrows are pointing in completely different directions. There is no correlation at all. Over a 10-year period, the discrepancy is even more stark: the cost of claims per policy actually fell by 2.5 per cent, while premiums rose 42 per cent.

Either claiming-gone-mad is the cause of the recent spike in motor insurance premiums, as the industry attests, or it is not. The hard data in the Central Bank’s report provides scant justification to support the industry’s assertions.

If there is little evidence to show that bloated claiming is the cause of the premium hikes, then what else could be the cause? Profit-taking by the insurance industry is another potential explanation.

From the pool of all motor premiums, the industry keeps whatever isn’t paid out in claims. Insurers invest some of it and use some to cover normal business operating costs. Whatever is left over, plus whatever returns insurers bank from past investments, makes up the industry’s pot of profits.

The Central Bank report shows that Irish insurers made an average profit of 9 per cent last year. That is considered to be an extremely healthy level

Over the 10 years until 2018, the industry kept an average of 25 per cent of all the premiums collected.

But during the second half of that period, when premiums were rocketing and the industry played its “compensation culture” tune with gusto, it kept a bigger share. In 2017, for example, the industry kept 41 per cent of all premiums.

The Central Bank report shows that Irish insurers made an average profit of 9 per cent last year. That is considered to be an extremely healthy level, and it makes the Irish industry far more profitable than the UK industry.

The Central Bank report also confirms what was already suspected: that when lawyers get involved, costs go up because the lawyers must be paid for and their advocacy also squeezes more compensation for claimants from the insurers.

This fact alone does not, however, explain the recent steep upwards trajectory of premiums. Perhaps the insurance industry can enlighten us.