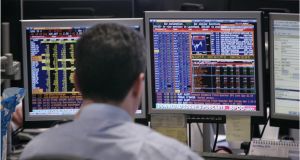 AIB is understood to be within weeks of agreeing a €130m takeover of Goodbody, including the company’s estimated €60m cash pile. File photograph: The Irish Times

Goodbody Stockbrokers, which is nearing a deal to be acquired by AIB, has repaid €450,000 of Covid-19 salary supports to the State, according to a company spokesman.

The money was returned in December. The decision to make a repayment “is totally unrelated to any of the current speculated discussions” around a takeover, the spokesman said.

Goodbody, which is 51 per cent owned by Kerry financial services group Fexco, has not commented on the takeover talks with AIB since they were reported by The Irish Times last November.

The then government introduced the Temporary Covid-19 Wage Subsidy Scheme (TWSS) at the onset of the first coronavirus lockdown late last March to prop up the pay of employees of companies hit by the economic shock, with a total of almost €2.9 billion paid out during its five months of existence.

The subsequent Employment Wage Subsidy Scheme (EWSS) has cost the State more than €2 billion so far, according to figures from the Revenue Commissioners.

Goodbody availed of the TWSS support for eight weeks at the outset of the pandemic. The firm, which is 49 per cent owned by management and certain members of staff, decided to stop availing of the supports last summer as the outlook improved, according to the spokesman.

“At that stage, the clear intention was to repay the money before the end of the financial [year] in December, which has occurred,” he said.

Fexco, whose foreign exchange business and VAT refunds service for tourists have been severely hit by the pandemic, also availed of the TWSS and, according to information published by Revenue last week, continued to benefit from the follow-on EWSS.

Goodbody was subject of a €155 million takeover agreement from Bank of China when Covid-19 struck. However, the Beijing-based bank backed away in July, citing uncertainty caused by the pandemic.

AIB is understood to be within weeks of agreeing a €130 million purchase of Goodbody, including the firm’s estimated €60 million of surplus cash, mainly resulting from the sale of its stake in the Irish Stock Exchange in 2018.

AIB sold Goodbody for €24 million in 2011 as it disposed of non-core assets following the financial crash under an EU restructuring plan that was in the works at the time, tied to its taxpayer bailout. AIB had extracted about €100 million of surplus capital from Goodbody before the sale, sources said in November.

6 Food intolerance group to double workforce as it expands