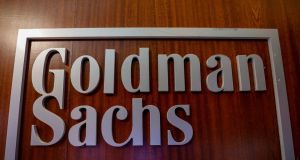 Sunday, New York Marathon. Wednesday, entry into one of Wall Street’s most prestigious clubs. It’s been quite the week for Barry O’Brien, an investment banker who was among the 69 traders, risk experts, lenders and other professionals elevated to Goldman Sachs’s exclusive partnership this week.

Although Goldman has not been a true partnership since its 1999 stock market listing, partner titles are still a golden ticket, offering base salaries of $950,000 (€831,871), membership of the bank’s most influential committees and exclusive investment opportunities.

On Wednesday 69 people received the call, literally, as Goldman’s new chief executive David Solomon and president John Waldron personally dialled around to give the good news to those who made it.

The newcomers include a London-based husband and wife and a thirtysomething trader who once reportedly made a $100 million profit in a few months. There are now 484 partners in a firm of 36,600 staff.

Women were better represented than ever before, accounting for 26 per cent of this year’s crop, though even after the latest promotions women will hold just 17 per cent of the total partner seats.

Ms Kennedy Miner said: “I absolutely did not expect it. It’s an incredibly opaque process.” She found out when she stepped out to take a call at a risk committee meeting, which included some people who already knew of her promotion.

She then had to sit through another 55 minutes of the meeting, trying to look “very calm and composed”, and was sworn to secrecy until the official announcement was made some four hours later.

As head of IR, Ms Kennedy Miner is one of the people who will have to make good on Goldman’s new management team’s pledge to be more transparent.

“I work at Goldman Sachs, I’ve worked hard my whole life,” she said of the extra work that may involve. “It’s an incredibly exciting time.”

Margaret Chinwe Anadu, head of Goldman’s urban investment group, missed the call from Mr Solomon telling her she had been promoted.

“When I joined 15 years ago, I never thought that I could be a managing director, much less a partner,” said the Nigerian-American banker, adding that the promotion of so many diverse partners was the result of years of work the firm has done to support diverse talent. Ms Anadu joined Goldman’s analyst programme directly after graduating from Harvard in 2003.

This year’s partners group was the smallest in 20 years and most people who wanted to be made partner missed out. “It is certainly difficult ... to be a recipient of something and know that others are not,” said Ms Anadu, who sees her elevation as a vote of confidence not just in her but in the impact investing her team is doing.

“There are 34 people in UIG or who work closely with UIG. We all got promoted today.”

She said one of the first calls she got to congratulate her was from a colleague who was hoping for promotion but was passed over. Not everyone takes missing out so well; it was reported earlier in the week that a London-based equities specialist quit because he did not make the cut.

Partners typically remain in situ for six to eight years, sources at the bank said, and every year a handful quietly step back from the partner ranks. Some do it by choice, some are asked to make way for others. Some re-enter the partnership at a later stage.

Departnering is a long way from the thoughts of the class of 2018, who also include a London-based married couple Beat and Niharika Cabiallavetta and the “$100 million trader” Thomas Malafronte, who works for Goldman’s New York securities division and made the newspapers in 2016 for making a nine-figure trading profit.

For now they are basking in their promotions. Ms Kennedy Miner is planning celebrations with her husband, three children and big extended Irish family. Ms Anadu had a long celebratory lunch on Wednesday.

And Mr O’Brien? He will celebrate by running the Philadelphia marathon in 10 days time. – Copyright The Financial Times Limited 2018