Busiest summer in airport’s history, with up to 20 per cent of cars parked from the North 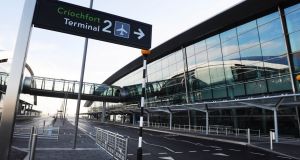 Dublin Airport is having its busiest summer in its 79-year history. File photograph: Aidan Crawley/Bloomberg

Dublin Airport’s busiest summer in its 79-year history has seen car-parking spaces at a premium in recent weeks with both its short- and long-term car parks full on multiple occasions since the beginning of last month.

High demand for spaces has been particularly notable in recent days as a surge of travellers from Northern Ireland passed through the airport ahead of the Twelfth, when the annual Ulster Protestant commemorations of the Battle of the Boyne took place.

Dublin Airport Authority (DAA) spokeswoman Siobhán O’Donnell said there had been a “noticeable increase in Northern Ireland-registered cars in July and particularly the run up to the 12th”.

She said as many as 20 per cent of the cars parked in the airport had come from across the Border over the weekend.

Ms O’Donnell said the airport had been doing its best to cater for motorists who arrived without first reserving a parking space, but warned that people who wanted to be sure of getting a space should book well in advance.

“We don’t like to disappoint customers and do our best to accommodate those who drive up for long-term spaces,” she said.

“We’re in the middle of our busiest summer ever handling an average of 100,000 passengers and 750 landings and take-offs daily,” she said. “This obviously impacts the car parks and particularly these two weeks when we have a lot of people from Northern Ireland going on holidays.”

There are 22,000 short- and long-term spaces at the airport.

Almost 875,000 additional passengers passed through the airport in the first six months of the year with the DAA handling more than 3.2 million passengers last month, a 4 per cent increase on the same month last year.

Ms O’Donnell said it was the busiest June in the airport’s history.