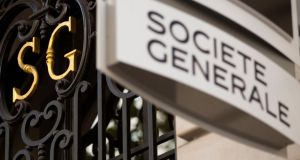 French bank Société Générale may merge with Italian bank UniCredit but the euro zone and the world do not need bigger banks. Photograph: EPA/DSK

This year marks a decade since the outbreak of the global financial crisis. This was a calamity caused mostly by bankers. After taxpayers, banks were its chief victims. Lehman Brothers, Bear Stearns, Royal Bank of Scotland: the villains are legion. Citibank was bailed out by US taxpayers. The less said about the Irish banks, the better.

Many of these banks had one thing in common: they were enormous. It was not just that they had gargantuan balance sheets, or too many branches, or that their loan books were bloated, or that they sold dodgy derivatives products. It was that few of those banks’ senior executives were conscious of the risks hidden behind their vast bulk, and even fewer understood them.

When those risks became unmanageable, the result was a recession from which the world is still recovering.

One would have thought, in the circumstances, that bankers might have learned their lesson. Yet some bankers still seem to think that big is better. The Financial Times reported this week that UniCredit, based in Milan and with operations across Europe, is pursuing a possible merger with Société Générale, based in Paris and also with operations across the continent.

These two banks are already among Europe’s largest. A merger would create a behemoth twice the size of either, with a potential market capitalisation of about €65 billion and combined assets of about €2 trillion. That is about 10 times the size of AIB and Bank of Ireland combined.

Of course, the transaction might never happen: the political and technical odds are against it, at least for now. Yet it is illuminating that Europe’s senior bankers are thinking along these lines at this time.

It suggests that the ideal of a pan-European bank remains alive and well. It suggests that some European banks still think they can compete with their US rivals in investment banking, perhaps the most cyclical and expensive corner of banking worldwide.

The evidence shows that the Europeans have lost this battle, and exhibit A for the prosecution is Deutsche Bank and its current woes. And it suggests that synergies – a slippery word uttered by bankers to imply post-merger savings that almost never materialise and for which investors rarely hold them accountable – can be achieved in an industry that has been cutting costs for a decade.

The European Central Bank is reportedly in favour of Europe’s big banks getting bigger. Consolidation would reduce the number of banks, make weaker banks stronger, make the sector easier to regulate, and perhaps boost the recovery of the euro zone economy.

If that is the ECB’s view, it could conflict with the stance of individual European governments, not least those of France and Italy, which have long been protectionist about their national champions, including in the banking sector.

There is a fascinating lesson in the reversal of fortunes in the idea of UniCredit leading the next wave of consolidation in European banking.

As the global and euro zone crises struck between 2008 and 2010, the era of pan-European banks – of which the Milan bank could be described as the model – looked to be over, barely a decade after it began. UniCredit is big in Germany and central and eastern Europe as well as being one of the two dominant operators in Italy. That was a weakness during the euro zone crisis, which squeezed banks between multiple conflicting regulatory and market pressures.

At the time, Deutsche Bank, with its concentration in Germany and its global investment banking business, looked to be the future of European banking. Yet today, the positions of UniCredit and Deutsche Bank have been reversed. The German bank is on its knees. It is difficult to make a profit in Germany. Its investment bank has become uncompetitive, against American rivals such as Goldman Sachs, and accident-prone. It is going through chief executives like a relegation-threatened football club goes through coaches. (UniCredit, incidentally, is one of the main sponsors of the UEFA Champions League.)

Both UniCredit and SocGen may now be ready to capitalise on the opportunities, such as they might be, afforded by a recovering euro zone. Yet that is an argument for why they should not be allowed to merge. They compete across European markets: many a street corner in post-communist central and eastern Europe has a branch of one or the other. That is a better foundation on which to play banker to an economic recovery than combining their operations, trimming them, and reducing competition.

There may be political objections to any tie-up between the two from the newly installed nationalist-populist-Eurosceptic government in Italy. Yet the bigger issue is this: the euro zone and the world do not need bigger banks. The biggest are already big enough.

As the events of the past decade have shown, and for all the changes to the regulation of banks in that time, giant banks are accidents waiting to happen: bloated, byzantine, and riven with internal factions. It would be an unforgivable supervisory and political mistake to enable history to repeat itself.