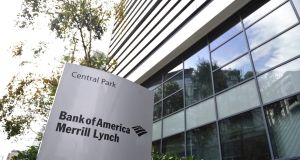 Bank of America Merrill Lynch has relocated its main EU banking arm and up to 100 staff from London to Dublin four months ahead of the Brexit deadline.

As part of its Brexit contingency planning, announced last year, the US banking giant decided to merge its main EU bank in London, which oversees up to €50 billion in assets, with its Irish subsidiary, effectively creating a new European hub in Dublin.

The merger plan, which has been ongoing for 14 months, was completed over the weekend following the finalisation of all necessary regulatory requirements, the bank confirmed to The Irish Times.

It brings the US bank’s Ireland-based workforce to more than 800, split between offices in Leopardstown and Hatch Street.

The majority of the relocated positions relate to control and support functions within the bank, including finance, risk, compliance, technology and operations. Its main trading arm is to be relocated to Paris in the first quarter of next year.

The bank is, however, considering the option of setting up an EU trading arm or broker-dealer in the Republic but is unlikely to make a final decision before Brexit.

Bank of America Merrill Lynch was one of the first banks to put in place concrete plans to deal with the uncertainty surrounding the UK’s decision to exit the EU next March.

Its new Irish unit will be led by the bank’s former chief financial officer Bruce Thompson while Cork native Rob Cahill will head up its global technology and operations function.

“After many months of preparation and having just completed our cross border merger, we now stand ready to serve our clients seamlessly in their final preparations for Brexit and for the long term,” Mr Thompson said.

Chair Anne Finucane said: “We are pleased to have worked closely and constructively with our regulators to complete this critical component of our Brexit preparations exactly on schedule and well ahead of the earliest possible date of the UK’s exit from the EU.”

Rival investment banks Barclays, Morgan Stanley and Citigroup have also revealed plans to expand their operations here as a result of Brexit.

Bank of America Merrill Lynch’s Irish subsidiary, Merrill Lynch International Bank (MLIB), had the largest balance sheet in Dublin in 2013, before its half-a-trillion-dollar financial derivatives portfolio was transferred to the UK.

At its peak four years’ ago, MLIB’s assets stood at $595 billion, three times that of Bank of Ireland. It currently stands at $5 billion.