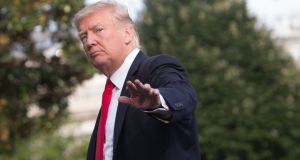 US president Donald Trump: his intention to cut the US corporate tax rate to 15 per cent may not be achievable with the border adjustment tax, which might have funded the reduction, now off the table. Photograph: Chris Kleponis

Irish tax experts remain convinced that US tax reform, whatever shape it takes, will not adversely damage Ireland’s economic prospects, suggesting incentives for US multinationals to base operations here will continue.

Alan Connell, head of tax at Eversheds Sutherland, said President Donald Trump’s speech in Missouri was light on specifics and largely aspirational. “In this respect, Ireland remains a very favourable jurisdiction for US multinationals doing business from, or looking to establish, a European base, particularly post-Brexit, as such corporations continue to enjoy the combined benefits of Ireland’s EU-approved, low-tax regime and deferral of US taxes until the related profits are repatriated back to the US,” he said.

Deloitte tax partner Louise Kelly said reducing the US corporate tax rate to 15 per cent, Mr Trump’s stated intention, was not achievable with the border adjustment tax, which might have funded the reduction, now off the table. “There’s no clear revenue raiser to pay for the reduced rate,” she said.

On the likelihood of the US reverting to a territorial tax system, where companies pay tax on US earnings, Merrion economist Alan McQuaid said taxes are easy to assess when profits are derived from physical assets with clear locations.

“It’s tougher when dealing with highly mobile resources such as patents, trademarks and licences,” he said, noting that tech companies have the most US patents and account for much of the $2.5 trillion in cash American companies have banked abroad to avoid the US corporate tax rate of 35 per cent. Apple tops this list with about $230 billion, according to Moody’s.

“At the end of the day, if policymakers don’t include rules that cover easily transferable assets like patents, companies could move such resources to lower-tax jurisdictions,” he said.

“All in all, I wouldn’t be unduly worried at this juncture. Trump hasn’t exactly been able to deliver much policy-wise in his first six months, and serious doubts remain about him being able to deliver at all,” Mr McQuaid said.

Joe Tynan, international tax partner at PwC Ireland said while Mr Trump’s plan was positive for the US, “tax reform is hard and complicated because for every person who benefits somebody has to pay”.

He said Ireland’s focus on the headline rate of corporate tax was misplaced as the other changes posed a bigger risk.

A possible issue for Ireland is that US companies would only be able to avail of the new territorial measure if tax rates in the countries hosting their subsidiaries are above a certain level, he said, noting Ireland’s corporate tax rate at 12.5 per cent might be below the rate viewed as sufficient in the US.