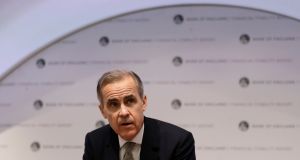 Once Bank of Ireland governor Mark Carney speaks in the press conference, his words are technically “public”. Photograph: Getty

The UK’s financial watchdog is investigating the revelation that an audio feed of the Bank of England’s market-sensitive press conferences was supplied to high-speed traders seconds before the events were more widely broadcast.

Following a rapid internal investigation, the central bank confirmed what it called a “wholly unacceptable” use of its back-up audio feed of press conferences by a third-party supplier, which it has refused to name, citing legal reasons. It referred the matter to the Financial Conduct Authority, which said on Thursday it was looking into the issue.

The identity of the entity supplying the audio feed has not been confirmed. However, Statisma News, a little-known audio news provider based in Essex, published a statement on its website in response to an inquiry from the Financial Times. It said it specialised in the “fast delivery of publicly available audio content”, adding: “We DO NOT carry embargoed information and we DO NOT release information without it first being made available to the public. It is impossible to “hack” or “eavesdrop” any live public event or press conference. Any such suggestion is dismissed out of hand.”

The company markets itself as a provider of superfast audio streams of central bank statements around the world. According to its Twitter feed, Statisma has offered customers the ability to hear audio streams “first” from the European Central Bank, South Africa’s central bank, the Federal Reserve and the Economic Club of New York, as well as the Bank of England, the Bank of Japan and the House of Commons.

RanSquawk and LiveSquawk, two other providers of audio news to traders, both said on Thursday that they did not have access to Bank of England audio streams.

The Bank of England confirmed that it was investigating use of audio feeds in response to an article in the Times, which reported that hedge funds had been eavesdropping on press conferences a few seconds before others heard the words of governor Mark Carney.

The bank’s audio feed was installed only to act as a back-up in case the video feed failed, but the Bank of England said it had recently discovered – “following concerns raised with the bank” – that the feed had been misused by a supplier since earlier this year.

“This wholly unacceptable use of the audio feed was without the bank’s knowledge or consent, and is being investigated further,” said the Bank of England in a statement. Those who received the audio feed had a five- to eight-second advantage over people who watched the main video feed, the Times reported, because audio was easier to compress and transmit than video.

The Bank of England said the FCA would investigate whether rules had been broken and trading had occurred on the basis of early information from the feed.

The central bank said that after identifying what was happening, it had immediately disabled the supplier’s access – before the Bank of England’s most recent press conference on the Financial Stability Report. It also underlined that security had not been breached in the release of market-sensitive decisions of its policy committees. The issue “related only to the broadcast of press conferences that follow such statements”.

According to people familiar with the situation, the watchdog’s investigation is likely to look at whether market abuse rules were broken by the service provider or whether any other rules were violated by the provider or other customers.

Once Mr Carney speaks in the press conference, his words are technically “public”. However, the matter is embarrassing for the Bank of England. Comments made by the governor and other senior Bank of England officials at the press conferences that follow meetings of the Monetary Policy Committee and Financial Stability Committee often move sterling and gilt prices; having a start of a few seconds could allow traders to pre-empt the rest of the market.

Amid low market volatility and steady interest rates, some funds and proprietary traders have focused on being the fastest in converting valuable information into trades by making the technology enabling them to do so as efficient as possible. They spend their own capital on trying to profit from tiny price discrepancies across thousands of transactions in microseconds.

But the race to be the quickest to trade on information from governments and central banks in a world where trading is automated has sometimes been problematic for authorities. In 2010 the US Department of Labor discovered that providers were using high-speed fibre optic cable to send data such as employment numbers directly to subscribers from a closed room reserved for journalists. Providers including Need to Know News, then owned by Deutsche Börse, were barred from the procedure, known as a “lock-in”, but no charges were brought.

The Times said that the relevant supplier had hacked into the audio feed at least since the start of this year and said documents showed the service had been sold on to high-speed trading companies through an unnamed market news service connected to the supplier. It is not clear that any hacking took place.

Clients were charged between £2,500 (€2,930) and £5,000 per press conference for access to the audio feed, the newspaper reported, adding that high-speed audio services had also been offered for similar events at the European Central Bank, the US Federal Reserve and the Bank of Canada.

The ECB said on Thursday that since September it had made its own audio feed of its press conferences, which gave listeners “almost real-time access” to what was being said. This so-called low-latency feed was designed to kill the market for companies trying to sell high-speed audio feeds of press conferences.

However, ECB officials had expressed concern about online adverts offering a subscription to high-speed audio feeds of its press conferences, even though they did not think such services were technically feasible. – Copyright The Financial Times Limited 2019

RTÉ held lobbying meetings with politicians 14 times in four months, register shows 16:30
Ireland’s love affair with Apple as passionate as ever 16:00
Fallon & Byrne founders McHugh and Byrne exit group 15:52
Developer Paddy McKillen loses challenge to Anglo shares report 15:31
‘If you don’t like challenges, you should not be in the airline business’ 15:05