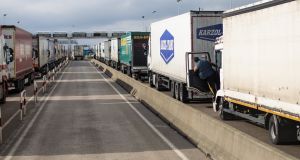 Britain is drawing up plans to charter ships to bring in emergency food and medicines in the event of a “no-deal” Brexit next March, in a move greeted with disbelief at a stormy meeting of Theresa May’s cabinet on Tuesday.

The cabinet was told that the heavily used Dover-Calais route could quickly become blocked by new customs controls on the French side, forcing Britain to seek alternative ways of bringing in “critical supplies”.

The warnings about the consequences of a disorderly British exit from the EU came at a cabinet meeting which saw ministers divided into two camps over how to unlock a deal in Brussels. One witness said there was “an almighty row”.

The prospect of Britain facing shortages of perishable food and medicines provided a bleak backdrop to the cabinet discussions, as Mrs May urged her ministers to back her attempts to secure a breakthrough.

The prime minister announced there would now be a weekly cabinet discussion on preparations for Brexit, whether under a deal or no-deal scenario. “The government’s priority is to secure a deal,” Mrs May told her cabinet.

David Lidington, Mrs May’s de facto deputy, briefed the cabinet that under a no-deal Brexit, the Dover-Calais route could be running at only 12-25 per cent of its normal capacity for up to six months.

“Whatever we do at our end, the French could cause chaos if they carry out checks at their end,” said one government official. “Dover-Calais would be the obvious pinch point. The French would say they were only applying the rules.

If Britain left the EU under World Trade Organisation rules, the UK and EU would be in different customs jurisdictions and would be expected to carry out checks on trade across the English Channel.

Chris Grayling, transport secretary, has discussed with government colleagues the possibility of chartering ships, or space in ships, to bring supplies into other British ports, thus avoiding the Dover-Calais bottleneck.

One person briefed on the plans said: “The idea of the government running ferry services is slightly farcical.”

Government officials say the idea would be to charter ships to use less congested sea routes. “We’re talking about bringing in critical supplies like food, medicines, maybe car parts,” said one official briefed on the plan.

Some 30 per cent of all Britain’s food requirements are met from imports from other EU countries; Dover is a key port of entry, with over 2.5m heavy goods vehicles passing through the port each year.

Eurosceptic Tories claim that Paris would not allow the Dover-Calais route to be disrupted because of the economic damage and disruption it would cause in the Calais area of northern France.

In May 1982, the British government requisitioned numerous private vessels, including the transatlantic liner the Queen Elizabeth 2, for use during the Falklands War.

Government officials say they do not expect to have to use legal powers to requisition ships, although with only five months to go until Brexit on March 29th, there is little time to charter ships on the open market.

Pauline Bastidon, head of European policy at the Freight Transport Association, said: “We are open to all kinds of ideas about how to keep supplies flowing in a no deal Brexit. But it’s hard to see where the extra ships would quickly be found. Nor can I see how other UK ports could possibly handle the huge volumes currently going through the Dover strait.”

Meanwhile the cabinet also heard Mrs May restate her opposition to any Brexit deal that included a “Northern Ireland-only” legal backstop plan for the Irish border that placed the region in a different customs and regulatory jurisdiction to the rest of the UK. – Copyright The Financial Times Limited 2018