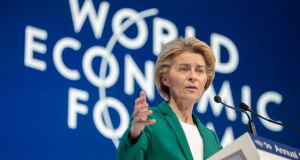 US president Donald Trump and European Commission president Ursula von der Leyen have vowed to press ahead quickly to reach a trade deal and ease tensions that have clouded transatlantic relations for months.

At a press conference after his short trip to the World Economic Forum in Davos on Wednesday, the US president said he expected to negotiate a trade deal with the EU before November’s presidential election. Shortly afterwards, the EU commission chief said Brussels was “expecting in a few weeks to have an agreement that we can sign together” with the US, covering trade, technology and energy.

The potential for a rapid fix to the trade troubles that have been festering for months between Washington and Brussels will be greeted with relief by business leaders, who have worried that Mr Trump would become more aggressive towards Europe on trade after securing a commercial truce with China this month.

However, even as the US president said he wanted to reach a deal with the EU, he said the bloc was harder to handle than China and warned he was ready to slap new tariffs on products from the bloc if negotiations faltered.

“[The EU] have trade barriers where you cannot trade, they have tariffs all over the place. They make it impossible. They are frankly more difficult to do business with than China,” Mr Trump said.

Washington placed tariffs on $7.5 billion of EU goods in October after prevailing in a World Trade Organization (WTO) case over illegal aircraft subsidies, which it has threatened to expand.

In Davos, Mr Trump also reiterated his administration’s threat to impose punishing levies on the European automotive sector, saying punitive measures could be quickly ramped up. “I have a date in my mind, it is a fairly quick date,” he said.

The US has also been sparring with European countries including France and the UK over proposed taxes on digital services. However, tensions with Paris eased this week after Mr Trump spoke to Emmanuel Macron, the French president, and decided to delay imposing tariffs on French goods, as Paris suspended collecting digital tax payments from US technology companies until the end of the year.

One EU official said the tone of US-EU trade relations seemed to improve after Mr Trump and Ms von der Leyen held a bilateral meeting at the Alpine resort on Tuesday. “We felt after yesterday that there is interest from the US to pursue this part of a positive agenda. This could be part of a broader package that would cover a lot of issues . . . between us.”

At his closing press conference, Mr Trump also said that Washington would ramp up its push to overhaul the WTO, which he has frequently criticised as giving unfair advantages to large emerging markets such as China and India.

Mr Trump said he expected to do “something very dramatic” in talks with Roberto Azevêdo, the director-general of the WTO, in the coming weeks. In order to force change, the US has brought the WTO’s dispute settlement system to a standstill by blocking the appointment of new judges to its appellate body, creating a crisis that is forcing a rethink of the way the body operates.

“We have been saying for quite some time that if the multilateral system, if the WTO is to deliver and perform its role in today’s global economy, it has to be updated, it has to be changed, it has to be reformed,” Mr Azevêdo said as he stood beside Mr Trump at the press conference.

“I don’t think anybody in Geneva misses the point,” he added.

Afterwards, however, Mr Azevêdo toned down expectations of a big breakthrough on WTO reform, which would have to be approved by all member countries. “I don’t think we are negotiating a big package of reforms [of the WTO],” he said.

1 Parts of Brown Thomas and Arnotts to reopen next week
2 Irish comic book artist designs face mask coverings for young flyers
3 Should my mam wait for house prices to drop before buying?
4 Four different lawyers paid over €500,000 each in Apple tax case
5 Thailand attempts to lure travellers with luxurious lockdown options
6 Brother is dragging his heels as executor of uncle’s will - is there anything I can do?
7 Hangover for the drinks sector as pint sales go flat
8 Covid-19 mortgage breaks: What’s the catch?
9 Irish whiskey sales near milestone of 12m cases a year
10 ‘I have a talent for justifying purchases’
Real news has value SUBSCRIBE