Long-term debts sale brings total of €5.25bn raised so far this year by the agency 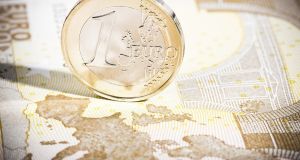 The National Treasury Management Agency (NTMA) has sold €1.25 billion in bonds in an auction on Thursday.

Both bonds were oversubscribed with the 2029 bond covered 2.2 times after receiving bids for a total of €2.13 billion of the debt. The were offers of €839 million for the €300 million of debt available in the 2037 bond, meaning it was 2.8 times oversubscribed.

The agency, which sold €4 billion of bonds in January also plans to auction short-term notes, known as Treasury Bills, on March 14th.

The NTMA is aiming to raise between €14 billion and €18 billion of long-term debt in capital markets this year as it continues its practice of raising money ahead of schedule to meet bond maturities.