Government restrictions on movement due to the coronavirus can be seen on Dublin's M50, normally one of Ireland's busiest roads, where daytime traffic numbers have fallen significantly. Video: John Cassidy 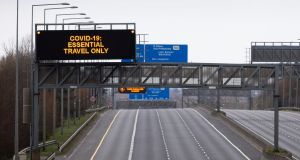 On one of the State’s busiest pieces of road, the M50 between junction 9 (Red Cow) and junction 10 ( Ballymount), traffic peaked at just over 3,800 in the 8-9am period this morning

Traffic levels have collapsed across the road network as new restrictions on who can travel to work come into force. Traffic had already started to fall in recent weeks as the schools closed and many people worked from home or were hit by closures, but the data from Transport Infrastructure Ireland’s traffic counter shows another sharp drop on Monday.

On one of the State’s busiest pieces of road, the M50 between junction 9 (Red Cow) and junction 10 ( Ballymount), traffic peaked at just over 3,800 in the 8-9am period this morning. This was around half the level on the same day last week and compared to a normal morning hourly peak of over 11,000. Even on Christmas day last year traffic peaked in the middle of the day at a hourly level of over 9,000, while New Year’s day traffic exceeded 6,000 per hour at peak.

The figures do suggest that a significant minority are continuing to travel to work, including many in manufacturing and essential services. These are allowed to continue to go to work under the new rules. Much vital freight traffic also continues. One of the key reasons for the fall-off on Monday morning is likely to have been the closure of many construction sites. The requirement on people not to travel in general for anything but vital reasons is also having a big impact.

The story is the same across the Republic and on various different kinds of roads. On the M8 between Cashel and Cahir traffic peaked at 428 vehicles during the busiest hour this morning, compared to a normal peak of 1,200 to 1,300. Traffic on the Carlow bypass peaked at less than 500 per hour, compared to 1,300 normally.

In Cork, commuter traffic is also well below normal, with traffic on a busy stretch of the N40 between the Jack Lynch tunnel and the Mahon junction peaking at 2,311 on Monday morning, compared to a normal level of around 5,500 to 6,000. Last Christmas Day the morning peak on this stretch was over 2,500 vehicles per hour.

In Dublin, traffic on the stretch of the N31 in South Dublin between the Stillorgan Road and the Rock Road peaked at just 189 cars this morning, a fraction of the normal morning peak of around 900 vehicles. Even last Christmas Day morning traffic on this stretch exceeded 500 vehicles ta peak.

The data shows that traffic started to fall off on Saturday, immediately after the restrictions were announced late on Friday. There were 28,348 vehicles moving between Junction 9 and 10 of the M50 last Saturday, compared to 63,500 on the same day a week earlier and normal Saturday volumes of over 110,000 before the crisis broke,