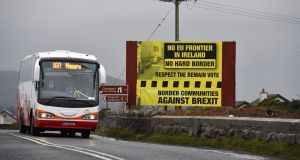 A sign campaigning against a hard Brexit, in Newry, Northern Ireland. A House of Commons committee heard UK firms were registering in Ireland as hedges “against worst-case scenarios”. Photograph: Charles McQuillan/Getty Images

British MPs have been told 100,000 firms in the UK have registered companies in Ireland since last year’s vote to leave the European Union.

Stephen Kelly, chief executive of campaigning organisation Manufacturing Northern Ireland, told a House of Commons committee that UK companies were registering in Ireland as hedges “against worst-case scenarios, if they develop”.

Speaking to the Commons’ Northern Ireland Affairs Committee, he said the numbers displayed the anxiety felt by UK companies about their future access to EU markets. Saying he had got his first phone call from a company looking for alternative manufacturing locations at 8am the day after the Brexit vote, he said he was aware others “are actively seeking relocations”.

Praising the Irish Government’s response to Brexit, he said Dublin is displaying a “single-team approach” to dealing with the challenges.

Commenting on last week’s Dublin Castle Brexit forum organised by the Government, Mr Kelly said it showed “ a very positive attitude that Ireland is poised to benefit from this”.

One of Northern Ireland’s largest manufacturers told MPs it made a decision within two weeks of the Brexit vote to build a factory across the Border in Dundalk. The Craigavon-based Almac Group, a pharmaceutical group employing 2,600 people, said its worldwide clients wanted to know what regulatory regime would be in place after Brexit.

“They wanted to know what was our EU solution going forward. We had to address that,” Almac executive director Colin Hayburn told the committee. “We needed an EU presence immediately to satisfy those customers.”

The Dundalk operation will employ 100 people within two years, he predicted, though its manufacturing operation will not move out of its Armagh home.

“We have no desire that they [Almac products] would not be manufactured in Northern Ireland. It would not be ideal in any way, but if there isn’t clarity and there is nervousness there in relation to what the future is, we might be forced into having a greater manufacturing presence in the South because of our need for EU operations,” he said.

1 FinCEN Files: Dublin business features in leak of US treasury documents
2 Aldi empire wracked by family feud
3 The FinCEN files: Unchecked by global banks, dirty cash destroys dreams and lives
4 Chris Johns: We’re in for a triple whammy of Covid, Brexit and the US elections
5 A look at Elon Musk’s track record ahead of Tesla’s ‘battery day’
6 Bord Pleanála clears way for 21-storey tower on former Apollo House site
7 Mark Paul: Government faces dilemma on which businesses to save
8 Dublin-based Fenergo considers $1.5bn listing
9 Valuation of $60bn sought for TikTok as Oracle and Walmart take stakes
10 Help, I’ve no PRSI stamps – can I still get a pension?
Real news has value SUBSCRIBE