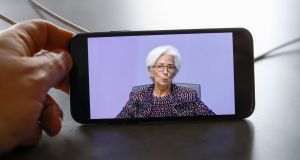 The coronavirus pandemic has sent the euro zone’s economy into an “unprecedented decline” that is likely to steepen before a recovery phase kicks in, European Central Bank (ECB) president Christine Lagarde has warned.

The trend pointed to “rapidly deteriorating labour markets” and “a significant contraction in economic activity” during the period of the pandemic, whose duration could not yet be determined.

ECB staff projections suggested euro area GDP could fall by between 5 and 12 percent this year, she told the bank’s post-policy meeting news conference.

Hours earlier data for the first quarter showed the euro area economy recorded the worst three-month contraction in a quarter-century of statistics, falling by 3.8 per cent, and most analysts are expecting an even sharper decline in the second quarter.

Ms Lagarde said the euro area “is facing an economic contraction of a magnitude and speed that are unprecedented in peacetime”.

Her stark assessment, along with US weekly jobless claims data suggesting lay-offs were now spreading to a wider range of industries, sent markets lower with the pan-European Stoxx 600 and Dublin’s Iseq both trending down

Her comments also came as figures showed Irish retail sales crashed by nearly 13 per cent in March, their worst monthly performance since January 2009, with bar sales registering a record 53.1 per cent drop and sales of clothing and footwear diving by 49 per cent.

The fall in retail here would have been considerably worse only for panic-buying ahead of the Government-enforced lockdown, which led to a spike in supermarket sales.

“An ambitious and coordinated fiscal stance is critical, in view of the sharp contraction,” Ms Lagarde said in a virtual press conference on Thursday.

She spoke after ECB policy makers reduced the cost of their emergency loan programme for banks, and unveiled a further facility to inject liquidity into the outbreak-stricken economy.

The ECB said the lowest interest rate on a programme that gives banks incentives to lend to companies and households will fall to 50 basis points below the deposit rate, currently at -0.5 per cent. Interest on the new, non-targeted facility will be 0.25 per cent below the main refinancing rate that presently is zero.

Officials kept their pandemic purchase programme at €750 billion, which together with earlier programmes, means it will buy more than €1 trillion of debt through the end of this year.

Ms Lagarde said the central bank is “fully prepared” to increase or extend the program if needed. Bond investors largely signalled satisfaction with the move, with Italian yields falling after initially briefly jumping.

Analysts expect the ECB to raise its annual bond-buying target for this year and add junk-rated bonds to its shopping list in the coming months as part of its efforts to keep the euro zone in one piece in the face of an expected wave of downgrades by credit rating agencies.

Frankfurt kept its main benchmark “Deposit Facility Rate” at -0.5 per cent, meaning banks are charged that annual rate for parking idle cash at the central bank.

Ms Lagarde was speaking after data showed the euro zone economy contracted at a record rate in the first three months of the year and inflation slowed sharply as much economic activity in March came to a halt because of the Covid-19 pandemic with economists expecting even worse numbers for the second quarter. According to a preliminary flash estimate from the EU’s statistics office Eurostat, economic output in the 19 countries sharing the euro currency in January-March was 3.8 per cent smaller than in the previous three months - the sharpest quarterly decline since the time series started in 1995.

Separate data from the US, meanwhile, showed initial unemployment claims totalled 3.84 million for the week ended April 25th, down from 4.44 million in the previous week and a record 6.87 million in March. Although the downward trend raised hopes that the coronavirus outbreak’s impact on the labour market had peaked, analysts said investors were still wary of the pace of an economic recovery from a looming recession. - Additional reporting Reuters, Bloomberg